The United States ambassador, Charles Ray encouraged Christian youths to hold on to Christian values of integrity, honesty if they are harbouring any future leadership positions.  He did that when addressing youths attending a dialogue on leadership and writing skills at 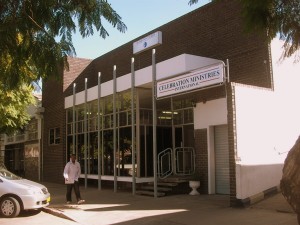 Celebration Ministries Church in Bulawayo. The ambassador also gave out to participants his latest book entitled Where You Come from Matters Less Than Where You  Are Going.

Ambassador Ray noted, “For you, young people, the current and future leaders of Zimbabwe, I hope that this book will encourage, exhort and inspire you as you press on in the goals that you have for both yourself and your country. I also hope that it serves you as a reminder of the things that matter most in life:  not what you do, but how you go about doing it; not who you say you are, but who you are, when no one else is watching; not where you come from, but where you are going.”

Ambassador’s book consists of 21 short essays written in 2011. Each essay is followed by questions or quotes meant to provoke discussion and debate on the issue. Topics include, “The importance of core values”, “What is justice?”, “To serve and protect”, and “Citizen participation leads to good governance.”

The Ambassador said most of his essays have already been published in the local media as opinion pieces or letters to the editor. The book was published by the U.S. Embassy’s Public Affairs Section and will be distributed at no cost to youth groups, libraries, schools and any other interested readers. 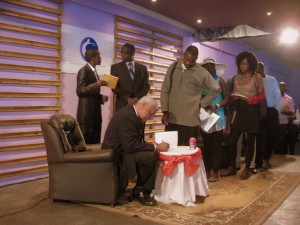 The Ambassador commended youths in Zimbabwe for being hard workers, innovative and always willing to learn. “I am impressed by the calibre of young people in Zimbabwe because they are smart, intelligent, educated and they should hold on to core Christian values of integrity, honesty and have a purpose for their lives if they are to succeed in leadership positions.”

Speaking to Relzim.org, the organiser of the dialogue Rabson Shumba, who is also an author, said the dialogue is an effort to expose young people, inspire them to be good future leaders who are capable of changing and transforming the communities they come from. “It was an eye-opening event and a great opportunity for the young people to open new avenues and to look beyond their current state” said Rabson Shumba.

The youths, who participated, praised the dialogue and expressed hope that many more events should be organised for the youths in the city. Nokukhanya Khumalo of Mahatshula Assemblies of God had this to say, “I am so inspired.  I learnt that it is important to manage my time, I spend a lot of time doing things that are not productive.”

Pastor Grant, the leader of Celebration Church Bulawayo and Matabeleland branches, said that the whole idea was to expose the youth in the church and outside it, those young people who come from humble beginnings, to influential people in society who came from similar positions and have made it in life. “Everything is possible with God and young people need to commit their plans to Him who is the author and finisher of their faith,” stressed Pastor Grant.