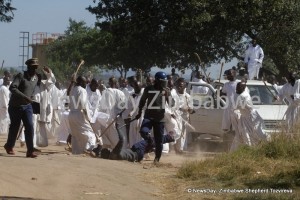 EMBATTLED members of the Johanne Masowe eChishanu have challenged the authority of Apostolic Christian Council of Zimbabwe (ACCZ) leader Bishop Johannes Ndanga and claims that the church leader is a representative of President Robert Mugabe.

The Vapostori threatened to approach the Constitutional Court if Ndanga does not lift the ban he purportedly imposed on their sect within the next five days.

At least seven anti-riot police officers, journalists and members of the ACCZ were seriously injured on May 30 this year when rowdy members of the sect attacked them.

The attack followed Ndanga’s announcement that the church, led by Madzibaba Ishmael Mufani, had been banned from operating in the country for alleged human rights abuses, including allowing fathers to test their daughters’ virginity.

But in a letter directed to Ndanga by the sect members’ lawyers Mbidzo, Muchadehama and Makoni Legal Practitioners, the Vapostori contend that the ban imposed by Ndanga infringed on their freedoms of conscience and religion which are guaranteed by the country’s Constitution. 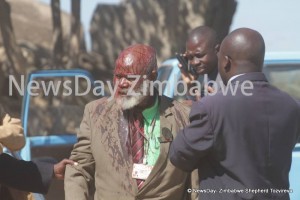 “The sect also wants to know if Ndanga’s claim that he was representing the Presidium and that he was the representative of high offices in government were true,” the letter reads.

They also argued that Ndanga had no legal authority to ban their sect and the allegations raised against them were malicious.

They further contended that Ndanga had no basis to impose such a ban on their group because it was not affiliated to ACCZ.

“We are further instructed that you, within the same period of five days from the date of this letter, reverse the ban, failing which our clients will be left with no choice, but to approach the Constitutional Court for the restoration of their freedoms of conscience and religion,” the letter reads.

The Vapostori also want to know in what capacity Ndanga visited their Budiriro shrine where violence later broke out leading to the arrest of 35 sect members.

“We have been requested to demand as we hereby do that within five days of receiving this letter you advise us the authority under which you were acting when you visited the shrine, the legal basis for your order to ban our clients’ section,” the letter further reads.

The lawyers accused Ndanga of making embarrassing and unsubstantiated allegations against their clients including claims that the Vapostori were involved in polygamous marriages in which under-age girls were married off to elderly men. 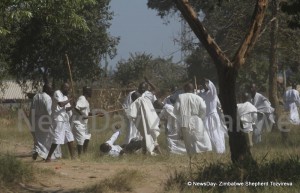 “Our clients advise us that they will not dignify your malicious allegations by responding to them in this letter, as such allegations are born out of a series of imaginations and hallucinations which you want the whole nation to believe.”

Ndanga confirmed receiving the letter and said his lawyers would respond in due course.

“We received the letter, but we have handed it over to our lawyers who are analysing it so that they can respond,” Ndanga said.

“The issues that are being raised are not why we had gone to the church. The lawyers are being misled. All that is in the letter is nothing of what we went to do there, but we will leave it to the lawyers to respond.”

At least 27 members of Johane Masowe eChishanu accused of assaulting police officers, journalists and ACCZ officials are currently facing violence charges and will be back in court on July 16 for routine remand hearing.

There is more to Budiriro police, vapostori clash