Women fast and pray for the Church and the nation

October 26, 2011 , published in News   by Mandla Tshuma
A group of women from different Christian denominations embarked on three days and nights of fast and prayer  in Bulawayo last week, during which they interceded for unity between different Churches and for the general welfare of Zimbabwe.
Religion in Zimbabwe visited the Baptist church in the city centre, where the solemn gathering was taking place 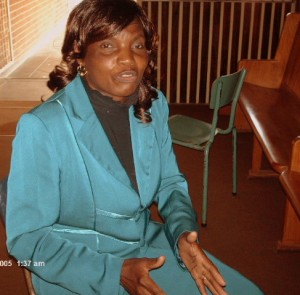 Pastor Bessie Dhururu in an interview with RelZim.org at a Baptist church last Friday. "We came to a time when we said, 'Why do don’t we do this in an open place, where we can invite other Christians to join us in praying for the Body of Christ, and for our nation?'"

and spoke to one of its organizers Pastor Bessie Dhururu. She had this to say, “We are a group of women from different Churches. We meet for prayers. We have been meeting in a [private] house every Monday just to pray for the Body of Christ.  We have been praying for some time and we came to a time when we said, ‘Why do don’t we do this in an open place, where we can invite other Christians to join us in praying for the Body of Christ, and for our nation?’ So we organised ourselves and that is how we came to this Baptist Hall.”
“We put together resources to hire this place and we have advertised to say, ‘All Christians regardless of denominations whether you pray under a tree – wherever you are – come and join us for prayer!’  We are saying at the end of the day we are the body and the head is Jesus. There are so many things that need the attention of Father, God and we are saying we better pray as members of the body of Christ,” she explained.
“There are a number of things which are not well in the Body of Christ. We are seeing that even in the Church of God there are now divorces and homes breaking up. All these things should be happening in the world. We are saying: Why are they happening in the Church? What’s wrong? What can be done to restore the Church to its former state?”
The woman of God, who is also a pastor at Moving with Christ Ministries, said Zimbabwe needs intercessors that would stand in gap for the people like Moses of the Old Testament. “When the Children of Israel went through the wilderness, they were the chosen generation. But time and time again, Moses would stand and pray and repent on behalf of the congregation. We are saying we also need people who can stand in the gap for the Body of Christ, to say,  ‘God, we have done wrong here, we have sinned here’, and come before Him.”
Pastor Dhururu, who said it was the group’s desire to see the Church of the Living God realigning with the word of the Almighty, emphasized the need for Christians to value repentance.
The prayers, that began on Thursday and ended on Saturday, happened between 9 am and 4 pm.
It appears, Zimbabweans have now realised that the only key out of any crisis is prayer, as public prayers are now the order of the day in the country. Of late, Christians in Bulawayo prayed for peace during elections expected next year, something which the war veterans also did in the run-up to the previous elections in 2008. Interestingly, women seem to have taken the lead in a bid to rid Zimbabwe out of its problems, with two prayer sessions having been organised by women and specifically for women in Bulawayo last week.
Tags: Baptists, Bulawayo, Pentecostals
Tweet