Kedmon Ncube, a 23-year old inyanga – African traditional faith healer – who had recently graduated from the African school of traditional healing, better known in the local Ndebele language as ukuthwasiswa, mysteriously took his own life by hanging himself in his sister’s bedroom. 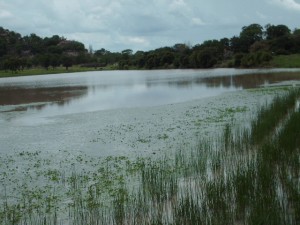 Msololo Dam in Maninji area where the late Kedmon Ncube was trained as a traditional healer. The dam is a source of water for livestock from Khalanyoni, Hobodo, Maninji and other villages. Zionist and other indigenous churches perform their baptismal rites at this dam. (photo by M. Tshuma).

The incident, which left Emkhayeni villagers in the Mangwe District (Matabeleland South), shell-shocked, took place during the past harvesting season.

Villagers at Emkhayeni and other surrounding villages of Khalanyoni, Hobodo and Nkubazwibi told Religion in Zimbabwe that Ncube had spent the greater part of his fateful day in the field with his family members harvesting round nuts.

It is reported that late in the afternoon Ncube left his family members in the field and headed for home. That was not an issue as his family believed, as usual, he wanted to go and sort-out his herbs as a traditional healer.

Upon getting home, when it was already drizzling, the rest of Ncube’s family including his mother, NakaLucky could not find the youthful inyanga at the kitchen hut where they expected him to be. When they did not manage to locate him at his own ancestral hut (indlu yabokhulu), they concluded that he had visited one of the neighbouring homesteads.

All hell is said to have broken loose when NakaLucky wanted to get a basin from her daughter, Thembi’s bedroom. When she tried to open the door, it appeared something was blocking it from inside until she force-opened it. She then saw a human hand protruding from behind the door and wondering what Kedmon was doing there, NakaLucky is reportedly having said: “We have all along been looking for you whilst you are her.”

When no response came, the elderly woman entered the room only to get a shock of her life, with Kedmon hanging dead from the roof of the room. In the blink of an eye, villagers from surrounding homesteads thronged the Ncubes as NakaLucky continued screaming.

Villagers said Kedmon’s funeral was one of the saddest and painful as nobody could explain how he had died and even today people still have no answers to that.

However, some people in the villages believe that Kedmon who was trained as isangoma (traditional healer that also cast bones) in Maninji by Mrs Tsananapo, one of the renowned inyangas in the community, had treated diseases that were beyond his power such as isikumbu (diseases that people get as a form of punishment), which cost him his life through backfiring. Others believe he could have been strangled by his own ancestral spirits.

Notwithstanding his mysterious death, Kedmon Ncube has been described by many as having been a good traditional dancer who has done so well at many occasions to honour ancestors known as imithethelo, where the brewing of African traditional beer is a must.

The late Ncube is also said to have helped many with different ailments from the surrounding villages.

Before he became an inyanga he was continuously falling ill until village elders advised that he be taken to a traditional faith healer for diagnosis who detected the presence of amadlozi (ancestral spirits) within him. After that he had to undergo a tough traditional healing training, according to Kalanga customs and religion, which lasted for more than six months.