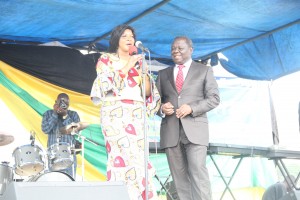 Prime Minister Morgan Tsvangirai and his wife Elizabeth at a peace rally in Chinhoyi. (photo: M.Chibaya).

Prime Minister Morgan Tsvangirai yesterday said the hardships that Zimbabweans have endured for a long time have left them “spiritually and physically bankrupt”.

He said the nation needed salvation ahead of polls slated for July 31.

Addressing non-governmental organisations, members of the business community, civic society, and ordinary residents at the Zimbabwe Congress of Trade Union (ZCTU) offices, Tsvangirai urged church and political leaders to respond to such a deficit within the society.

“We need to reflect on the challenges that Zimbabwe is facing at the moment. The country is spiritually and physically bankrupt because our people have suffered for too long,” he said.

“That is the challenge we face ahead of polls. We need to respond to that as a nation for the people to be happy. The people need salvation so that they can be happy as a nation.”

He cited the Gukurahundi massacres, the destruction of homes during the Murambatsvina era, violence related to farm invasions and the economic decline Zimbabwe has suffered in the past decade.

“At the moment, we have unemployment as our biggest social challenge. The economy shrunk by more than 50%,” he said.