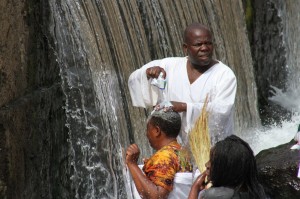 In Zimbabwe, self-proclaimed prophets say they can help people with weight loss, making ‘miracle money’ out of nothing and raising the dead. Some of these prophets say their powers come through their penis. Their targets are desperate women.

Alfred Makurumidze was a prophet with Johane Masowe Apostolic sect, a leading spiritual congregation in Zimbabwe. He will be spending the next 10 years behind bars for raping a woman under the pretext of casting away evil.

Makurumidze, 40, met his victim on the street and told her she was possessed with demons. The woman believed him and accepted the invitation back to his place for a cure. When they got there, he forcibly had sex with her. After realizing her lapse in judgment, she went to the police. In another case, the prophet Blessed Mvura duped over 20 women into having sex with him because he could allegedly solve their problems through one special system: penetration.

Mvura left a packed court in stitches when he explained his method. “I only use my organ when treating people. I rub it with a specific medicine for that particular disease and insert my manhood into the woman’s privates,” he said.

He was arrested after one of his clients contracted a sexually transmitted disease. After being accused of promiscuity by her husband, she told him of the prophet’s methods. When the husband confronted Mvura, the prophet said the wife was a client and knew how he operated. As such, Mvura reasoned, what he did could not be defined as rape.

In Bulawayo, Zimbabwe’s second largest city, a woman, speaking on the condition of anonymity, describes how she became the third wife of a prophet.

“I went to him because I wanted luck with my visa application to the United Kingdom. Life was tough and a distant relative had offered to invite me to the UK where I would then work to support my parents and siblings back home,” she recalls.

“I would visit his shrine every three days. At times, we would sleep as a group in the mountains for all-night prayers. This went on for about two months until he offered to pay boarding school fees for my three sisters. One thing led to another and I fell pregnant. That is when I discovered he had two wives ahead of me. I stayed with him and his wives for a year. The household politics was hard for me. The other two women had got there in a similar way and their worst fear was a new wife.”

The woman continues: “He hardly had time for us because he would sleep with other women he met during prayers. One day he told us he was bringing two more women to be his wives as per tradition. Since he was already struggling to fend for us, I thought it was time I left him.”

She now works as a maid. “I am a better person now even though I have a poor-paying job,” she says. ”I have learned to be wiser.”

The judiciary system treats these cases as rape because women give in against their will, according to magistrate Tawanda Muchemwa.

“This is rape. Women are forced into these arrangements. But most cases go unreported because these women feel ashamed and some fear what their husbands might do to them if they discover. Others suffer in silence because of lack of education,” said Muchemwa.

Such cases are more and more being reported to police, according to Manicaland provincial police spokesman Enock Chishiri.

“Women initially don’t suspect that these men are bogus prophets preying on them. They give in because of their desperation. We advise women to exercise extra caution when dealing with prophets. They should avoid being alone in secluded places with them,” said Chishiri.

The majority of Zimbabwe’s population lives in poverty. Women usually carry the largest burden due to a lack of access to opportunities; systematic discrimination in education and healthcare compound the problem. Under circumstances like these, spiritual solutions seem too easy not to try.