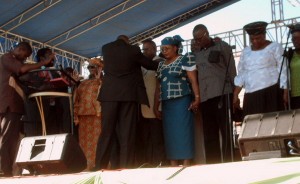 On Saturday, Zimbabweans from all walks of life thronged to the giant Barbourfields Stadium in the Mzilikazi township of Bulawayo to pray for their motherland in the face of drought, corruption, homosexuality referendum, election and other issues facing the Southern African country.

Speaking during the special prayer organised by Bulawayo pastors and graced by senior government officials, Prime Minister Morgan Tsvangirai called for peace among the citizens. “I urge all the political leaders whether you belong to ZANU-PF, MDC, whatever party, let’s put our national interest first. We cannot be divided on the basis of political affiliations and cause harm to each other because we happen to have different political affiliations,” he said.

To the church leaders Tsvangirai said: “A house divided cannot stand. My difficulty is that when the church is divided, it cannot lead us spiritually.” He thanked and commended the spiritual leaders for taking a leading role in preaching peace in the nation.

The meeting saw speaker after speaker condemning sin in all forms and calling Zimbabweans to repent to see God move in their lives and nation. The meeting culminated in prayer for the government ministers.