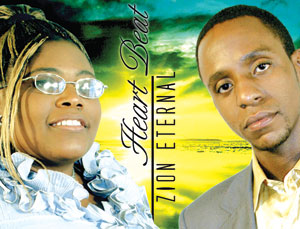 The new year has ushered in a new sound on the gospel scene and Newsday recently published a story about a new album Zion Eternal, a new gospel outfit that is made up of two new voices, Rutendo ‘Lioness’ Ndanga and Ashley ‘Winterton’ Mafunga.

Rutendo Ndanga who is a single mother of two comes from Mushungwa village in Zaka, Jerera, Mavingo, whilst Ashley Mafunga who comes from Fern Valley in the Eastern Highlands. The group are new on the gospel scene and it will be interesting to see how the public responds to their new worship sound.

Together the musicians have chosen to use the name “Zion Eternal”,with both of them being professionals in their own right. Winterton attended the National University of Science and Technology and he graduated in Applied Biology and Biochemistry. He is also the holder of an LCCI Diploma in Marketing. Rutendo the “Lioness” also is well learned and she holds a degree in Sociology and Gender studies obtained from Women’s University in Africa.

Listeners should look out for Heart Beat, which will be released in March.