Pretoria-based Orthodox deacon Stephen Hayes sent me this link about a recent publication by Unisa Press on healing ministry in Zimbabwe. 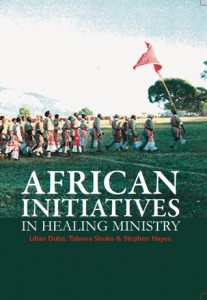 Entitled African Initiatives in Healing Ministry, this book is a fruit of collaboration between Lilian Dube, who was the first African woman to earn a D.Th. (1999) from Stellenbosch University since its founding in 1866, Tabona Shoko (see Resources for more by this author) and my Orthodox fellow from Pretoria.

The blurb of the book reads the following:

Healing ministry is becoming more prominent in many different Christian traditions in Southern Africa. In the past, it was largely confined to the ‘Spirit-type’ African Independent Churches (AICs), where it was (and still is) a recruitment technique par excellence. For these denominations, healing is central to the mission, and the church is primarily seen as a healing institution. In the Western Initiated Churches (WICs), healing was earlier seen as peripheral, but has become more central in recent years.

This book focuses on churches’ healing ministries in Zimbabwe, looking at the historical setting and the background to Christianity. The book examines the traditional religion among the Shona people of Zimbabwe, as well as the healing traditions in African independent churches in general. It consists of four case studies of healing in different Christian denominations in Zimbabwe: two African independent churches and two Western-initiated churches (Roman Catholic and Anglican). The book also looks at the wider application of the case studies, and the general implications for Christianity in Africa.

In his blog Khanya (a Zulu word for “shine”, and a Sotho for “glory”; khanya is also the doxy in Orthodoxy), Deacon Hayes explains the division of  labor between him and his colleagues:

Lilian Dube looks at the Zvikomborera Apostolic Faith Church, whose prophet/healer, Agnes Majecha, is known to specialise in neutralising zvikwambo, magical objects that have got out of control. People might buy a chikwambo from a traditional healer as a talisman to ensure health and prosperity, but it tends to become a burden, and then people find it is hard to get rid of it.

Lilian Dube also compares the role of women in healing ministry in traditional African religion and Christianity, using Agnes Majecha as an example of the latter.

Tabona Shoko looks at healing ministry in the Anglican and Roman Catholic Churches, and especially the ministry of Fr. Lazarus Muyambi in the Anglican Church, and Fr Augustine Urayai in the Roman Catholic Church. One of the things I found quite interesting here was that the Anglican healing ministry was linked to a community of nuns, and that something similar had happened about 1500 kilometres away in Zululand. Tabona Shoko also examines the role of the St. Elijah Church, an African Independent Church that broke away from the Lutheran Church.

My task was to try to draw these different strands together and to compare them with healing ministries in other parts of Africa and the world.