James Kirchick, who has reported from Zimbabwe, in a recent article entitled “Love the Sinner. Why is Robert Mugabe visiting the Vatican?” analyzes the uneasy relationship between the Vatican and Zimbabwe’s President.

“Robert Mugabe has long been an admirer of the Catholic Church. Born at a Catholic mission station in British-ruled Southern Rhodesia, he attended Jesuit schools. The Jesuits instilled a love of learning in Mugabe, who went on to earn seven degrees during the 14 years he spent in prison for anti-regime activities,” writes Mr. Kirchick. Despite the travel ban imposed by the EU, President Mugabe was present at the beatification ceremony of Pope John Paul II whom he greeted personally during the latter’s visit  in the 1980s. 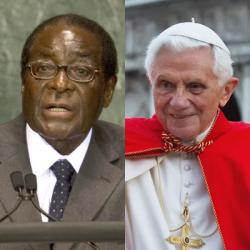 But Mugabe’s attitude towards the Catholic Church results to be an incoherent one. The President has been at war with local Catholic bishops in Zimbabwe for some time.  “Even though I was born in this church, their bishops are all over me on a daily basis. They attack me and criticize me because they are led by the whites who have their interest and agendas,” Mugabe thundered at the opening of an 18,000-seat house of worship belonging to the Zimbabwe Christian Church, an indigenous African sect, several days before his appearance in Rome.

And yet the Vatican’s treatment of Mugabe has been the polar opposite of the courage shown by local Catholic officials. Father Nigel Johnson, based in Zimbabwe, spoke to SW Radio Africa and said; “For the past 20 years all sorts of people have floated the idea of ex-communicating Mugabe”. Ex-communication would mean that Mugabe would no longer be able to receive communion or be allowed to be buried in a Catholic cemetery. But more importantly it would send a very strong message to Mugabe that his actions were considered completely unacceptable.

Catholic clergy in the country, including Father Oskar Wermter and former Matabeleland Archbishop Pius Ncube have been outspoken critics of the Mugabe regime. And it was the Catholic Commission for Justice and Peace that produced the detailed report on the Gukurahundi atrocities of the mid-eighties.

The church’s mandate to welcome all sinners, including murderers and dictators, has been defended even by those who were upset by Mugabe’s visit. But it is the level of warmth that was shown to the ZANU PF leader that has been of great concern. As Mr. Kirchick concludes in his reflections, religion plays a significant role in Mugabe’s self-image and that the Vatican should attend more to this feeling of the President to bring about change in Zimbabwe.