November 28, 2012 , published in In the Churches Blog   by Giovanni del Autore 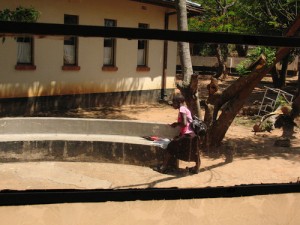 Doug MacLellan: “Generally the waiting area near the wards of the Howard Hospital can be busy or not. The photo was made before I was denied permission to shoot. I keep my promises and did not photograph at the Howard yesterday. My objective was not this photo—it can look exactly like this whether busy or not—but the wards. I have no idea if those wards were full, as has been my experience over the years, or not, as is rumoured. I really wish the Salvation Army had given me permission to photograph those wards. Even if a quarter full it would show that the Howard is functioning. Without independent verification, we are left with just the Salvation Army’s word. I cannot understand their line of thinking in this case.” (Courtesy Doug MacLellan)

Having been to the Salvation Army-run Howard Hospital in Mashonaland Central Province of Zimbabwe four times in previous years, Canadian Doug MacLellan‘s photos were sometimes used in the church’s periodicals for PR purposes. However, when earlier this month MacLellan went back to the hospital, he was denied access to the Howard compound.

“One would think [the Salvation Army] would be happy to have a photographer confirm their story that media reports that the hospital is functioning at 10% are false,” Lorna Simard, who follows the Howard saga, comments on the Salvation Army Canada website.

MacLellan has posted photos on his internet blog at the following link.

According to The Zimbabwean, 16 people who were standing trial in Chiweshe have been acquitted, in the ongoing case of a protest against the dismissal of the chief doctor at the Howard Hospital.

The 16 were part of a group of 20 Chiweshe residents, including eight nurses at the Howard mission, who were being charged in connection with the protest in August. The demonstration, organised to display the public outrage over the forced removal of Dr. Paul Thistle, turned violent and saw police units being called in to fire tear gas and make arrests. 12 people were arrested on the spot, while the eight nurses were later brought in for questioning for allegedly ‘inciting’ the violence.

Back in October, four of the group of 20 remained on remand in the ongoing trial, after 16 of the accused were acquitted. A source who has been attending the proceedings at the local magistrate’s court told SW Radio Africa that the charges were dropped against the 16 because of lack of evidence.

In the meantime, there is still hope that Dr. Thistle will be reinstated at the hospital where local residents have explained medical services have not returned to their usual standards since he was forced to leave. A resident told SW Radio Africa that most patients are being transferred to other facilities, because there has been no replacement for Dr. Thistle yet.

In early November, a report by SW Radio Africa said that Dr. Thistle remains in Zimbabwe, but has not been allowed to return to the hospital. He reportedly plans to return to Canada with his family over Christmas.

“The situation remains tense. Almost everyone wants the doctor to come back, but we don’t know what is happening. I can say that the number of people going to the hospital has decreased by 80%,” a resident said.

The Zimbabwe Salvation Army chief has also been reassigned in the ongoing saga. Vinece Chigariro will assume her new duties in Kenya from January 2013. According to a Salvation Army official, the decision to transfer her had been made months before any concerns about Howard Mission Hospital were raised.

Chigariro would be replaced by Commissioner Colonel Henry Nyagah, an officer of the Kenya East Territory serving as a territorial leader in Malawi.

The Herald reports that in October the Salvation Army internal audit at Howard Hospital revealed there was no abuse of funds. The audit was conducted following reports that funds at the hospital were being diverted. There were also allegations that donated goods were not being accounted for.

The church also dismissed as false allegations against Territorial Commander for Zimbabwe Mrs Vinece Chigariro that she abused her office and converted donor funds to her personal use.

“International Headquarters Commissioner Amos Makina, himself a Zimbabwean, states that any allegations of wrongdoing on the part of.. Vinece Chigariro are proven to be unfounded,” said a Salvation Army official. “The Commissioner has not used donated funds for personal use or for the day-to-day running of Zimbabwe Territorial Headquarters.”

“Captain Paul Thistle is in the process of receiving a new appointment in his home territory of Canada,” Salvation Army’s Major Pallant said. He said another officer would replace Dr Thistle, but in the meantime Dr Aaron Museka will be acting chief medical officer.

International observers suggest that the Salvation Army should have organized an outside independent audit, a well-established practice with institutions that value accountability and transparency. 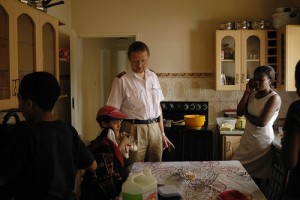 Paul Thistle prepares to take James, left, and Alexander, centre, to school while Pedrinah Thistle answers phone. The Thistles are living in a tempoaray home in Harare, as they wait for Paul to be terminated from the Salvation Army and begin to look for new work in Zimbabwe. (Courtesy Doug MacLellan)

A short look at the Wikipedia entry about the church will reveal a host of examples of controversy the Salvation Army has been engaged in recent times.

“Paul Thistle was not given any hearing, there was no independent inquiry into the Howard Crisis and no one lost their job except Paul,” writes Doug MacLellan on his photoblog. “I was not allowed to photograph the hospital. Something very unusual is going on. ..Paul Thistle will move on but what the Salvation Army has done in Chiweshe needs to be fully revealed and made public.” Referring to controversies miring the Canadian Salvation Army’s reputation MacLellan further observes, “Missing toys are one thing but missing healthcare for thousands of rural people will result in misery, economic hardship and death.”

A source in Chiweshe said that there is widespread speculation that Dr. Thistle will return to Zimbabwe after Christmas to head another medical facility.