You don’t need an archbishop’s visit to fill the churches of Harare.

For the most part, there was nothing unusual about this Sunday afternoon at 1 pm. There was the weekly changing of the shifts at the International Conference Center at the Rainbow Hotel: thousands of faithful from the New Life Covenant Church were fellowshipping after the three-hour morning service, while the uniformed volunteers of the Spirit Embassy were keeping their  multitudes in line for the afternoon worship service.  Both organizations long ago overflowed their home spaces and rent the conference center while they build new ones. 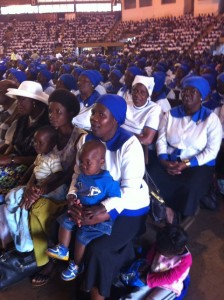 A ten-minute walk down Samora Machel Avenue, past the open fields where the white-clad Vapostori gather in groups under the occasional tree and next to the big green church of Faith World Ministries, are the large stadiums and showgrounds of Exhibition Park, where another choir was using the first agricultural hall.

But something was up: United Family International Ministries had filled Glamis Stadium there.  Normally, they would be at smaller the City Sports Centre next door, but they had a special event today led by their extraordinarily popular prophet Emmanuel Makandiwa (with 50,000 people, an usher generously calculated).

So instead, the City Sports Centre was host to 15,000 Anglicans, mostly colored blue and white from the uniforms of a sea of ladies sodalities and mothers unions, with a black stripe from the robes of the two-hundred-member choir, a few light specks from fifty white faces, and a dozen television cameras, all waiting for the eucharistic celebration to begin.  And begin it did with enough procession and praise of God Almighty in Shona and English to make any Gothic cathedral jealous.

It was a joyous and festival occasion, but not without pains as the Archbishop of Canterbury pointed out several times: “you have to face injustice and the arrogance of ‘false brethren’ as St. Paul would call them” and “the doors of your own churches have been shut against you”.  He talked not just about the suffering of the local Anglican Church but of the whole country’s battle with violence, the HIV pandemic, and the destructive power of diamonds.

But more powerful than Archbishop Williams’ sermon were the repeated introductions of the other hierarchs.  The celebration began with the main celebrant Archbishop Chama introducing by name and description (with time for applause) each of the other bishops of the Church of the Province of Central Africa, as well as the other visiting bishops from South Africa and Tanzania. Half of this litany was repeated by Archbishop Williams before his homily.

The message was clear: we are here and we are united. United in the Anglican Communion, and united in the church in Africa.  Anyone (and you know who you are) who wants to point to national or ethnic boundaries has a lot of work cut out for him.

Although peace and resilience were part of the event’s message, I mostly came away with the images of unity and solidarity — and that’s what you need for a long campaign. This is what the Zimbabwean bishops meant when they said this would be “a pastoral visit designed to demonstrate solidarity with the Anglican Communion in the country”.

Of course, the head of a church coming from afar to talk to a persecuted country about “solidarity” has all the reminiscences of Pope John Paul II arriving in Poland in 1979 and invoking the Holy Spirit to “come and renew this land” — with the founding of the Solidarity movement there a year later.

The Anglican Church’s role in Zimbabwe is not a large one — as our opening tour of church life in Harare hinted.  But social movements don’t usually start big — rather with a few Gdansk trade unionists or a Tunisian fruit seller.  Then comes the transformative moment that unites a larger group’s attention to the injustice.  Zimbabwe is waiting for that moment and perhaps the tragedies in the Anglican church, where widows and orphans are the visible victims, will be that catalyst.

For also RelZim’s Special Coverage of the visit of the Archbishop of Canterbury.