reprinted from Staten Island Live, by Maura Grunlund, with abridgements and minor additions 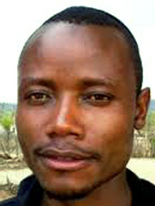 Modreck Maeresera is a leader of the Lemba Jewish community in Zimbabwe (Photo: Staten Island Live)

Modreck Maeresera, a leader of the Lemba Jewish community in Zimbabwe, will be visiting Temple Emanu-El in Port Richmond a neighborhood situated in Staten Island (one of the five boroughs of New York City, United States) on February 22-23 as part of a North American speaking tour.

The tour, which began on February 7 and will continue through March 2 in Illinois, Texas, Florida, Massachusetts and Maryland, is a first for a leader of the Lemba community. Rebbetzin Bonita Sussman of Temple Emanu-El is on the board of Kulanu, a non-profit organization that is sponsoring the talk and supports isolated and emerging Jewish communities such as Lemba throughout the world. In the summer of 2010, Rabbi Gerald Sussman and his wife spent two weeks visiting an emerging Jewish community in Cameroon and last February hosted talks from one of its leaders.

Lemba communities in recent years have seen renewed interest in Judaism and an increased desire to link up with Jewish communities throughout the world, said Rabbi Sussman.

“We’re very fortunate that we’re able to have someone like Modreck be our guest,” the rabbi said.

“It’s an important story and quite unusual.”

Maeresera comes from a committed family of Lemba Jews and is deeply engaged in strengthening the Jewish identity of his Lemba community and reeducating them in Torah studies and Jewish ritual observance.

Together with Dr. Rabson Wuriga, president of the Zimbabwe Lemba community, Maeresera established a cyber-learning program with Jewish educators from Israel to begin the process of connecting the Lemba with the worldwide Jewish community. Weekly Sabbath services are conducted by Maeresera in Harare, and by Dr. Wuriga in the village of Mapakomhere using a prayer-book in Hebrew, English, and the native language that Maeresera translated. Last spring, Maeresera and Dr. Wuriga were involved in the preparation and running of the first Passover seder among the Lemba in modern times.

In his presentation, Maeresera will share the story of his community, their customs and observances and the problems they are facing in their struggle to maintain their Jewish identity. He will seek donations through Kulanu for the construction of a Great Zimbabwe Synagogue in Mapakomhere and support for religious and educational outreach programs based in Harare and Mapakomhere.

Maeresera will speak at Temple Emanu-El Shabbat services that Friday -NT at 8 p.m. On that Saturday a 9 a.m. service will be followed by a free noon lunch in honor of the rabbi’s birthday and then a talk by Maeresera. For information, consult Kulanu.org and Templeemanuelsi.org or call the temple at 718-442-5966. Temple Emanu-El is at 984 Post Ave.