Reprinted from The Standard, with minor additions 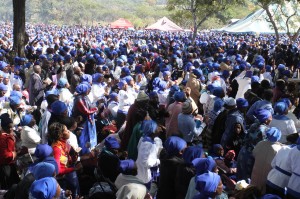 Over 20 000 jubilant members of the Anglican Church of the Province of Central Africa (CPCA) converged at the revered Bernard Mizeki shrine on Saturday for the annual pilgrimage, five years after being denied access by the disgraced ex-Bishop Nolbert Kunonga.

Over 20 000 jubilant members of the Anglican Church of the Province of Central Africa (CPCA) converged at the revered Bernard Mizeki shrine yesterday for the annual pilgrimage, five years after being denied access by the disgraced ex-Bishop Nolbert Kunonga.

Ordinary members of the church could not hide their joy at returning to the shrine after a long time, with some openly shedding tears.

Kunonga, who was holding onto church properties, was kicked out of the province by the High Court in November last year.

The court ordered him to return the seized assets to CPCA, led by Bishop Chad Gandiya.

Delivering his sermon to the eager crowd that kept cheering and ululating, Bishop Gandiya hailed his flock for remaining calm during the torrid battle.

Gandiya heaped praises on the members for standing faithfully behind him throughout the “dark period”.

He told the crowd that they had not fought back when the deviant Kunonga faction forcibly ejected some of the clergy from the church buildings.

“The rightful people who deserve to be at this shrine are gathered here today. They kept us out with guns and everything but our God fought this battle on our behalf. He has brought us back to the shrine,” said Gandiya. “You remained resolute in your support of our cause and today our efforts have been rewarded greatly.”

Gandiya said he was elated that his members were finally back to their “rightful place”.

“For five years we were in exile but we told our members to employ what we coined ‘kneeology’, meaning stay on your knees and pray. That is how we won this battle,” he said.

“It was not easy but we soldiered on knowing that eventually we would be fairly judged. We have waited for this day for five whole years and finally it has happened.”

Gandiya said the church was unfazed by what had transpired in the past, but would march on ahead and claim more victories.

Gandiya, who was flanked by several other bishops from all the provinces and clergymen from Malawi, Zambia and the UK, also called on his members to go and participate in the registration exercise for the harmonised elections.

He made an appeal to the congregants to go and vote in peace and to shun violence.

“There shall be no violence during elections and members are urged to remain peaceful”.

Gandiya also called on the political leaders not to fan violence but to promote peace during and after the elections.
He said those that had defected to Kunonga were still welcome, and urged his members to forgive them.

“We openly welcome our brothers and sisters and bear no grudges against them. It is all in the past,” he said.

Echoing her Bishop’s sentime-nts, Aquilina Shazha from Lower Gweru said they would not mind worshipping with the defectors, as they are only too pleased to be back at the shrine.

“For all those years we congregated at the Marondera show grounds, the other camp employed heavily armed police details who kept us out but we still honoured our martyr Mizeki.”

‘RETURN TO THE SHRINE EVOKES MEMORIES OF EARLIER FESTIVALS’

Another church member from Marondera, Esnath Kaukonde said coming back to the shrine had brought back memories from earlier festivals when there was calm in the church.

“We are just so excited to be back here, since Friday we camped here not minding the cold because we have waited for a long time to come back.”

There were also some members who had come from as far as Plumtree. Gogo Thembani, who hailed from the border town said even her sore legs could not keep her from attending the function.
“I’m just happy that I am also here, when I go back home I will tell my grandchildren all about it. I have never seen so many people in my life,” she said.

Reiterating Gogo Thembani’s remarks, deacon Mike Muchandireya from Redcliff said it was phenomenal being part of such an event.
“Kuita kwaMwari chete [That’s God’s way of doing things], that’s all I can say. I have no words to describe my joy but am grateful to be here.”

Kunonga led a breakaway faction from the CPCA in 2007 forming Anglican Province of Zimbabwe alleging that the former condoned homosexuality.