Another Zimbabwean is awarded Benemerenti medal

At the beginning of May, Mr. James Kuseri, who this month completes 30 years of service to the Apostolic Nunciature in Harare,  was awarded the Vatican Benemerenti medal.

James Kuseri was the Pope's personal driver in Zimbabwe.

Mr Kuseri joined the Nunciature in Harare  on May 3 1981, as the official driver of the papal embassy. He has been with the Vatican diplomatic corpse since its establishment in 1981. In the course of this time, he served under six Papal Nuncios. During the pastoral visit of Blessed Pope John Paul II to Zimbabwe in 1988, Mr Kuseri had the privilege of driving the Pontiff. 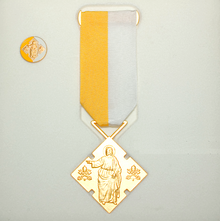 Benemerenti medal, a Roman Catholic mark of recognition since 1925.

In recognition of this sincere and committed service, Archbishop George Kocherry, the Apostolic Nuncio, has recommended Mr Kuseri to Pope Benedict XVI as “a well deserving person” (this is what “benemerenti” stands for).

Last year Mr. Karikoga, headmaster of Emerald Hill School for the Deaf in Harare received this medal in recognition of his service to the Roman Catholic Church through the education and care of children with hearing and speech difficulties.