At least 15,000 people colorfully adorned thronged the City Sports Centre to witness the head of the Anglican Communion Archbishop of Canterbury Rowan Williams deliver a powerful sermon that was tinged with political connotations, as the Church found hope in words after months of persecution from Bishop Nolbert Kunonga. 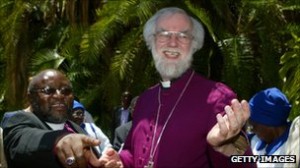 The Archbishop with Bishop Chad Gandiya in Harare (Getty Images).

The Eucharist service that started at 1 pm was the biggest Anglican meeting in years and members of the Church marveled at the word of Williams who preached acceptance and condemned violence.

“In this place there is no place for violence or retaliation, churches are not there for politics, as Christians we say we do not want violence even as we face elections,” were some of the words that poured from Archbishop Williams to the pomp and celebration of the multitude, who pressed incessantly to get close to the podium, where the colorfully dressed heads of the church sat, Bishop Chad Gandiya among them.

“I loved the sermon from the Archbishop especially where he said that a Church is not a building but the belief that we are together a one Church. That is exactly what we have been doing and we have run away from violence and came up with our own churches,” said Anna Moyo from Chitungwiza. 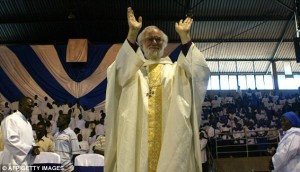 The Anglican spiritual leader greets the congregation at the City Sports Centre in Harare. (AP image).

Another Anglican follower Desmond Maripo said that, at first, he was angry that they had lost the Church to Kunonga but now he is happy because the Archibishop is with the Church during the time of need. “The visit by the Achbishop is a symbol that we have support, even if Kunonga persecutes us we still have people who stand alongside with us. But the most important message that I got is Jesus will never leave you.”

Earlier on, Williams urged the members of the Church under fire not to despair and rather follow the footsteps of Jesus Christ. “While we are celebrating, can we tell our political leaders and say to them, “Listen not only to the word of the people who suffer but also to the word of Jesus over the suffering of his people.’” 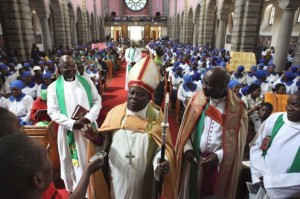 And while the Anglican Church was preaching peace and tolerance, Kunonga’s followers were chanting in and outside the Anglican cathedral in Harare. And the message that they delivered to the world was that they are intolerant.

Nevertheless, the Eucharist proceeded peacefully and saw at the end of the day the growth in courage of the people whose homes and churches have been destroyed by Kunonga’s followers. “Let’s respect each other, the message that we want to send during Eucharist is that we do not want to live in fear or intimidation. God has opened a door of possibility no one can shut, even our enemies have a chance to get into the presence of God,” said Williams.

Archbishop Williams arrived just after 11 am at the Church’s Avondale offices after travelling by road from Malawi.

Bishops who attended the service include head of the Church of the Province of Central Africa Archbishop Albert Chama, Bishop of Harare Chad Gandiya within this province, retired Bishop of Harare Jonathan Siyachitema, retired Bishop Sebastian Bakare and Manicaland Bishop Julias Makoni. It was stressed twice during the service that Bishop of Masvingo Godfrey Taonezvi could not be present because of health issues.

Prominent members of society who are members of the Anglican Communion and attended the prayer include Constitutional and Parliamentary Affairs Minister Eric Matinenga, Clerk of Parliament  Austin Zvoma and Zanu-PF Politburo member Victoria Chitepo.

Kunonga protest at the Cathedral

Nolbert Kunonga marked the Archbishop’s arrival in the capital by attending a protest at St Mary’s Cathedral.

“I was not excommunicated . . . Gandiya is silly, he is a silly man himself for inviting a homosexual to this country,” said Kunonga while addressing a Press conference from the pulpit at the Anglican Cathedral in Harare on Sunday. 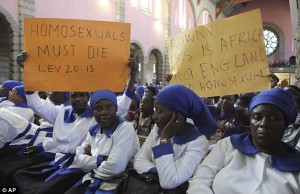 “Rowan is a criminal and so am I. We are both criminals so how can a criminal excommunicate another criminal from the church?”

Bishop Kunonga has turned some of the churches he has seized into colleges and nursery schools, throwing members of the church aligned to Bishop Gandiya onto the streets, leaving schoolchildren and orphans without teachers or caregivers.

Kunonga defended his move, saying there was nothing wrong with turning churches into schools, saying history was littered with churches that have been turned into colleges and universities.

“Oxford University was a church and yet you want to raise issue when it happens in Zimbabwe. Cathedrals are universities and it is our place to develop people who want to grow and develop intellectually. I can’t deny those who want to emulate me a chance to do so. Remember I am also an academic,” he said. 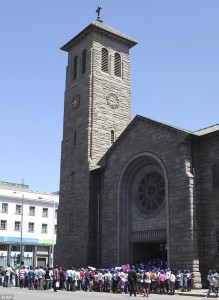 Daily Mail reported that standing in front of 1,000 supporters, he said Williams’s visit was a ‘crusade for gays’.

‘This is a demonstration against homosexuality. I told people to come and demonstrate if they wanted,’ he said. ‘Rowan Williams erred by accepting homosexuality and that has broken up the church all over.’ Kunonga even accused the Archbishop of being gay.

But Archbishop Williams dismissed the faction as one motivated by greed and violence. He told his congregation: ‘You know how those who by their greed and violence have refused the grace of God try to silence your worship and frustrate your witness in the churches and schools and hospitals of this country.’

2 Responses to Archbishop Williams inspires Anglicans from all over Zimbabwe