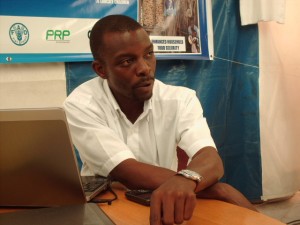 The organization, whose mission is to spread a passion for the supremacy of God in the spiritual, economic and social transformation of rural communities in Africa, trains rural farmers in Matobo and Mangwe districts in goat and poultry farming. “We have people from as far as Manicaland and other parts of the country who have asked us to come and do similar programmes in their areas,” said Thabani Moyo, the organisation’s business development officer.

Moyo said his organization does not only train villagers but also links them up with the market in Bulawayo. “We group farmers in different groups so that when they want to sell their goats they do it collectively. We have managed to talk to Imbizo Meats [a local abattoir] who frequently go down to the districts with their trucks to buy goats instead of farmers incurring unnecessary costs individually travelling to the city to sell their livestock,” explained Moyo.

He said Khula Sizwe Trust have also managed to build relationships between villagers and village heads, chiefs and veterinary officers, as they always incorporate them in the trainings. “We have not been donating any goats but we have been supporting farmers in growing their head. We want them to deal with what is theirs so they may well look after it,” he said. 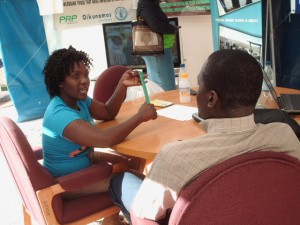 Lucia Mahlanza of Khula Sizwe Trust explains to a client, Prosper Ndlovu, services offered by her organization, during ZITF. (Photo by M. Tshuma)

Lucia Mahlanza, the Trust’s communications officer, was helping Moyo to clarify to all those interested what Khula Sizwe does to develop rural communities in Matabeleland.