Dr Goodwill Shana: Corruption is rife in the church

Churches in Bulawayo last Thursday commemorated the World Anti-Corruption Day amid revelations that the church has become the most corrupt entity in Zimbabwe. 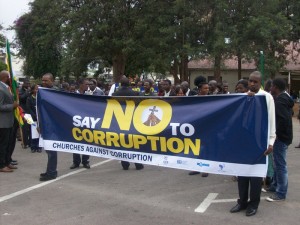 The belated commemorations started with a city march. Various pastors and church heads joined the rest of the world in condemning corruption.

Among the church leaders present were Dr Goodwill Shana who is part of the Anti-Corruption committee formed in 2009. Reverend Useni Sibanda of Zimbabwe Christian Alliance was there as well.

In his speech Dr Shana said the march was meant to condemn every act of corruption in the country.
“We are here to stir up the voice of the Church. Corruption is a sin and it is a reproach to the nation,” Shana said.

“Zimbabwe is rich in minerals and human resources. But why are we poor? It is because of corruption. We want the church to raise its voice,” he claimed.

Shana made remarks that shocked congregates when he said the church was the most corrupt entity in Zimbabwe since it constitutes 75 % of the entire population.

“If the church is 75 % of the population it means that corruption is rife in the church. Where there is light, darkness will flee so we want the church to shine the light and shun corruption,” Shana said.

Pastors from places like Binga, Nkayi, Lupane and Hwange (all four in Matabeleland North), Betbridge, Matabeleland South and Bulawayo were present to commemorate the day which was set by the United Nations on December 9.

The event was jointly organized by the Evangelical Fellowship of Zimbabwe, Catholic Bishops Conference and Christian Alliance. 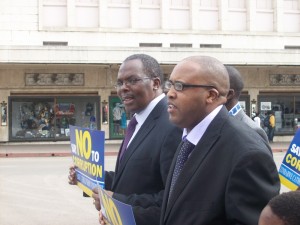 Present at the meeting were government ministers, civic society and about 500 pastors.