Evangelical cyclists bike across the US for AIDS sufferers in Zimbabwe

Some tough, God-loving cyclists met last Sunday in Mission Viejo’s Mount of Olives Lutheran Church in California before biking cross-country for the victims of AIDS in Zimbabwe and a number of other countries on Africa. 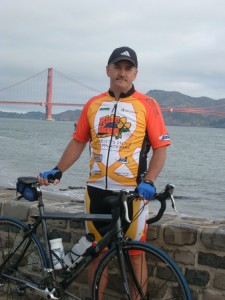 Ride for Hope Coast to Coast is an evangelical charity that brings food and other necessaries to Africa’s needy, and also preaches Christianity to those it feeds. The charity is sponsored by Christ’s Hope International.

The Mount of Olives Gala that began at 6:30 pm last Sunday brought 20 cyclists and 30 team supporters to the church. So far this year, the group has raised $60,000.

As a Christian organization, Ride for Hope preaches abstinence to those threatened by HIV/AIDS in Zimbabwe and several other African countries like Kenya and South Africa.