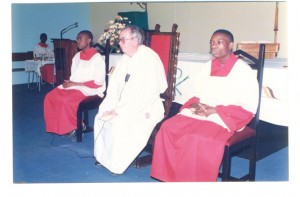 Father Sean Coughlan, O.Carm, who served as Carmelites Superior in Zimbabwe from 1961 to 1970, died at the Beacon Hospital in Ireland on November, 12. He was in his ninety first year.

Fr Coughlan arrived in Zimbabwe in 1949. He served  at Saint Joseph’s Mission in Sakubva (the first high-density suburb to be established in Mutare in eastern Zimbabwe)  from 1958 to 1960.

As early as 1960, Catholic Bishop Donal R. Lamont, O.Carm had plans for a cathedral in Mutare to replace the Holy Rosary church which had been built in 1923. This church had face stone walls but its tin roof and walls were defective. After much consultation and much fundraising, the new Cathedral of the Holy Trinity was built and blessed by Bishop Lamont in 1971. Fr Coughlan was the first cathedral administrator.

Fr Coughlan who was the Regular Superior in Umtali (present-day Mutare) together with his Council put a lot of thought into what eventually became Carmel College.

He was elected Assistant General at the Carmelite General Chapter in Rome and after a few months he had to reside in Rome for over a decade from the early 1970s on.

His Funeral Mass is scheduled for November, 16 at 11.30 am followed by burial in Glasnevin Cemetery, Dublin (the largest non-denominational cemetery in Ireland)

Siloka Fundikwa who knew Father Coughlan from his time in Zimbabwe has this to say about the Catholic missionary:

He loved technology..the first person I ever saw using an electronic diary back in the day. Each appointment was diarized and he never took lightly to missing appointments. A man of wisdom, precision, perfection, humility, passion, very prayerful and full of love for young children.

Always meditating on the greatness of the Lord and encouraging young altar boys to do well at all times. Those times at the altar were amazing, and with him there was no room for silly mistakes or fidgeting. Those picnics were the best and I will forever cherish him as a father figure.

Blessed to have known him, humbled to have worked with him and inspired to follow his amazing spiritual path.