HIV pastor in Hwange: once you discriminate, it is very hard to help positive people grow spiritually 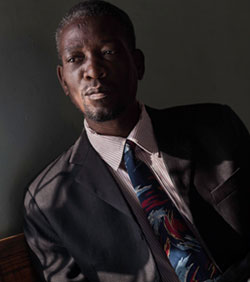 positive,” he would tell himself. “I’m a pastor and I’m HIV positive.”

On the day he worked up the nerve to say it out loud to his congregation in Hwange, the backlash was almost immediate. “Some of them were discriminating me, stigmatizing me. Some even chased the people from the church,” he said. “They were telling me, ‘If you are HIV-positive, we don’t want to worship with you. We don’t want to fellowship with you.'”

Ndlovu still preaches in that same weather-beaten building on the outskirts of Hwange, telling anyone who will listen that he’s “positive that I am positive” — or in other words, physically strong despite the disease and living a Christian lifestyle with his HIV-positive wife and son.

He knows “stigma and discrimination” can be hard things to overcome in a nation where the virus is still so closely associated with “sinful behaviour” like extramarital sex, drugs and homosexuality.

“But churches for too long have been looking at this thing as an evil thing,” said Ndlovu, who doesn’t know how he contracted the virus. “People can be good Christians and still be HIV-positive.”

Churches in Zimbabwe, he said, “have been acting but they must do more – be even more open – if we are going to stop this.”

Around 1997, when the epidemic was hitting its peak in Zimbabwe, it was estimated that a full 29 percent of adults were infected with HIV. And with 80 percent of the nation identifying as Christian, few institutions had the moral authority to wield such influence on the topic.

Wield it they did. When the churches – along with other sectors of the society, including schools, media, industry, and others – were asked “to do more,” as Ndlovu put it, many simply amplified the messages they had been preaching all along.

The Zimbabwe Council of Churches, the Evangelical Fellowship of Zimbabwe, the Apostolic Faith churches, to name just a few, mobilised resources to help prevent and treat the disease. From the pulpit, many hammered home the ABCs of HIV prevention: “Abstain from sex until marriage,” “Be faithful to your spouse,” and when all else fails, some churches said, “Use a Condom.”

The message was “critical, especially at the community level,” said  Perry Mwangala, the Global Fund to Fight AIDS, Tuberculosis and Malaria’s senior portfolio manager for Zimbabwe. And for that reason, he said, faith-based groups have been particularly effective partners in their HIV prevention, testing and counselling efforts.

Today, no one’s quite sure which sector to thank, but the HIV rate in Zimbabwe has fallen 50 percent by some estimates, now clocking in around 15 percent of the general population. Many scholars call the decline “remarkable” given the massive social, economic and political upheaval taking place in the nation during the same period.

Part of that drop is due to HIV-positive residents dying of AIDS or moving to other countries, said Dr Regis Choto, the deputy national coordinator for the nation’s antiretroviral treatment program. “But the major cause of that decline, we attribute to behaviour change.”

While many church leaders are proud of their role in encouraging such widespread behaviour change, there’s a building realisation that a second church-led movement needs to take place to help reduce the stigma.

In recent years, training sessions have been conducted throughout Zimbabwe to help pastors think about how to better communicate with their HIV-positive faithful. And according to Rangarirai Chiteure, the coordinator for Global Fund-supported programs within Zimbabwe, the question is often asked point-blank: “Is it a sin to be HIV-positive?”

“Often in these meetings they come to the conclusion that it is not a sin,” says Chiteure. “It’s just like any other illness. Because once you call it a sin, you are already discriminating against the person who is HIV-positive. And once you discriminate, it is very hard to help them grow spiritually.”

Reverend Ndlovu in Hwange hopes more faith leaders will join him soon in that message. Preaching behaviour change alone isn’t enough to return Zimbabwe to full health, he knows. Those who contract HIV also need to know that they won’t always face a wall of discrimination; and they need role models to demonstrate that there can be a future even with the disease. “My life alone speaks louder than what I can say.” “Everyone knows that I have HIV. And everyone sees that I am healthy– they see me living.”

Pastors from across Zimbabwe trained to preach about AIDS