RelZim.org talked to Sheikh Bilaal Bush Gwenzi, the administrator at the Islamic Information Services of Zimbabwe in Bulawayo, to find out more about their faith, aspirations and activities in our country. Sheikh is a title for an Islamic scholar – someone well-versed with Islamic principles – and it is also used to address elderly Muslims. 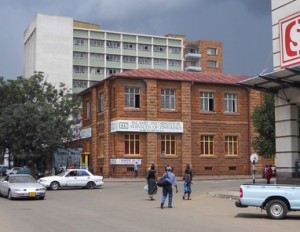 Explaining who the creator is, the administrator had this to say: “Who is this creator? In English they call him God, in Ndebele uNkulunkulu, in Shona Musikavanhu or Mwari, in SeTswana Modimo and in Arabic, Allah.  Someone may say why don’t the Moslems use the name God? The word God changes in its usage. It may be written with a small ‘g’ or written as gods or even as goddess. For us, Allah is the definite creator.”

Sheikh Gwenzi stressed that his religion does not force people to become part of it. “You come willingly; you are not forced to become a believer, but you must be convinced. All faith comes through conviction,” he emphasized, adding that once converted, Muslims are expected to obey whatever they are commanded to do. Muslims religiously and systematically pray several times a day, for at least five minutes facing the holy city of Mecca, where Prophet Mohammed was born. “We pray five times a day; in the morning before sunrise, in the afternoon, late afternoon, immediately at sunset and at night,” Sheikh Gwenzi explained, adding that they do not necessarily need to gather every time for those prayers. From Zimbabwe, Sheikh Gwenzi said, Mecca is in the North, North-East direction. Sheikh Gwenzi added that believers who can afford to travel to the Middle-East are encouraged to visit the city at least once in their life time during the annual pilgrimages to the holy city, only permissible to Muslims.

The Islamic community has seven mosques in Bulawayo: in the city centre, Magwegwe, Makokoba, Lobengula, Mpopoma Parddonhurst and Barham Green where believers congregate on the day of Juma (congregation) – Friday afternoon – every week. Asked if Islam is given the recognition it deserves in the country, Sheikh Gwenzi said: “In Zimbabwe there is complete freedom of religion and we are safe here.”

Meanwhile, Sheikh Gwenzi invited all those that want to know more about Islam to approach their offices situated at the corner of Main Street and 10th Avenue. The offices are open on Tuesdays, Wednesdays, and Thursdays from 8:30am to 4:30pm, while on Fridays business is between 8:30am and 11:30am. The Islamic Information Services of Zimbabwe in Bulawayo has a significant collection of Islamic literature and DVDs on the religion and conducts Islamic lessons at no cost between 10am and 1pm during the said working days.

Sheikh Gwenzi also appealed to members of the Bulawayo community who have misconceptions about the Islamic way of life to also approach their offices for clarifications. He added that funds permitting, they will plan to reach out to rural communities.

Majlisula ulama Zimbabwe (Council of Islamic Scholars in Zimbabwe) – the biggest Islamic organisation in the country – has among other charity works donated a variety of educational books in the country to both Moslems and non-Moslems. In addition all mosques are run as schools in which the Islamic doctrine is taught.

RelZim.org would like to invite our readers to contribute to the site by sending updates and opinion pieces about the activities and spiritual life of the Islamic community in Zimbabwe.