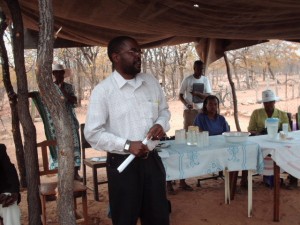 Khula Sizwe Trust, a Christian NGO operating in Zimbabwe, has transformed the lives of a number of Matabeleland South communal goat farmers through training them on how to look after the livestock.

At a media tour organized by the non-profit  organization in Matobo District under Chief Bidi, a number of farmers described how Khula Sizwe Trust had transformed their farming methods. “Before Khula Sizwe came here, the number of our goats always got reduced every rainy season, as they used to run to hills and fall prey to predators. But now that is history as we have since built them proper shelter,” said Dominick Jiyane, proud owner of 84 goats and sheep.

“Through the goats I am able to pay fees for my children who are studying at St Joseph’s nearby and I am always the first if not second parent to pay every term,” he added.

Jiyane’s wife Meddis thanked the NGO for teaching them how to vaccinate the livestock in order to immunise them against diseases. She said, through the organization, she had learned keeping records of the domestic animals.

Khula Sizwe Trust started the goat and sheep production and marketing project in Matabeleland South in 2009, during which, lessons were held at Maphisa growth point. The organization’s executive director, Charles Moyo said, to date, they were working with 1,693 farmers in Matobo and Mangwe districts.

He said his organization realized that goat farming was the easiest for the rural farmers with almost each and every family having at least one, adding that the livestock were drought resistant and also a fast way of making money, as they multiply within a short space of time.

The organization has loaned building material to farmers for the building of partitioned goat and sheep kraals while it has also helped them to form groups to enable them to buy vaccines collectively.

The tour, first of its kind organized by the organization with the mission of spreading a passion for the “supremacy of God in the spiritual, economic and social transformation of rural communities in Africa,” was attended by journalists from different media houses, hundreds of farmers and the local leadership.