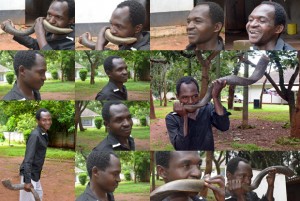 When I first met Hamlet Zhou, he was the guitarist in Andy Brown and the Storm, for years one of Zimbabwe’s most popular and exciting bands.

At the time, I was based in Zimbabwe, where Hamlet was born and had lived his entire life. I had come there to do film and music projects, and Hamlet was a good friend of my housemate and was a frequent visitor to my apartment.

One day, I mentioned to him that I was interested in doing a trip to the Mberengwa District in southern Zimbabwe, about 125 miles from the South African border. I knew that Hamlet’s home village was somewhere in that region, so I wanted his advice on transport. This is not an area with any major towns or tourist destinations, so he was curious about why I had decided to travel there. I explained to him that I had read and seen documentaries about the Lemba people in South Africa, but although I had heard that there was also a Lemba population in Zimbabwe, I had never come across them and knew nothing about them.

I said that I am a Jew, and, as I understand it, the people known as “Jews” today, are just one branch of the ancient Hebrews or Israelites, and the Lemba are another. All of us have preserved some aspects of the original culture and lost others. I wanted to meet the Lemba of Zimbabwe and to find out more about them. Hamlet then surprised me by saying that he was a Lemba himself.

Hamlet does not claim to be an authority on Lemba religion and history, or a representative of any kind. But as a musician living in Harare, and playing modern Zimbabwean music, he began to take an interest in his Lemba heritage and has made several trips to his village to learn Lemba songs and musical traditions from the elders. He has also taken up playing the shofar, known among the Lemba as the panza.

His next project will be a first for Zimbabwe: a contemporary album of Zimbabwean Lemba music, using traditional songs and instruments as a foundation for a modern, guitar-based interpretation. He is currently preparing for the recording. His latest album, Mavanga, is available online through Britain’s Red Admiral records.

After numerous informal and fragmented conversations over the years Hamlet and I have known each other, I finally sat him down for a proper interview. I started by asking him about his childhood in the village of Taperesu, one of a cluster of villages along the banks of the Mwenezi River, a tributary of the Limpopo. Taperesu is a mixed village of both Lemba and non-Lemba, across the river from several other villages that are Lemba only.

What do you remember of the Lemba festivals or ceremonies from your childhood?

Actually, I grew up during the Independence War, so the annual Lemba festival in Zimbabwe was suspended starting in 1974. Before that, there had always been one big annual gathering for the Lemba, but during the war there was a lot of fighting in the rural areas, and it was hard to get people to come, so they just stopped doing it. Independence came in 1980, but there was still political violence for a few years, so the annual festival was only revived in 1988.

What were the traditions that you grew up with?

From the moment you are born, you are taught that you are a Lemba. You are taught about the history, how our ancestors came from Israel to a place in Yemen and eventually traveled and moved to through Africa. Also, Lemba boys are all circumcised, but there are different customs: In some of the villages the boys are circumcised when they are babies, while others, like me, get circumcised as part of the initiation ceremony. I was circumcised at the age of 12. Once you are initiated you are allowed to teach the younger kids. Some of the Lemba families are priests. They are ones who have been the guardians of the knowledge all these years. They have their own get-togethers that no one else sees, so probably they have ceremonies they perform that I don’t know about.

Your family seems to have been quite assimilated in the village.

My parents did not talk much at home about the religion or traditional culture. The priests mostly taught us oral history about the origins of the Lemba and that we have our distinct identity. The non-Lemba people in the village would call us “Jews.” When I was small I didn’t even know what they were talking about. I only came to understand as time went on: Many people don’t like us. They just see us as these strangers, these outsiders. Also they believe we have secrets, and they also want to know what we really do, beneath the surface. That’s how people are: If others are just doing their own thing in their own space, they become suspicious and start prying, “But what are they really doing? Who are they?”

In the past, when the Lemba first came here, some of them were advisers or consultants to local chiefs, that’s how they came to be granted land. So, there are lots of legends about Lemba people supposedly knowing secrets and possessing magic powers. Some people even believe that a Lemba can just point at a bird in the sky, and the bird will instantly fall to the ground dead, without even being touched. So, there are people who are afraid of the Lemba and think we are all witches.

Do the Lemba speak the local languages, like Shona and Ndebele, in any distinct way? Are there are any words particular to them, or an accent?

You can usually hear when someone is a Lemba. They have a way of talking. It’s not that they have different words, or even an accent, but a way of talking in proverbs or sayings. They like to use clever, twisted expressions in a way that you can recognize that this person is Lemba.

In Zimbabwe, many people practice traditional religions and ceremonies when they visit their family villages but attend whichever Christian church appeals to them when they are in the city. Is this true of the Lemba as well?

I know that it never used to be like that. Being a Lemba always meant that you were not a Christian. But nowadays people are exposed to many churches and options in the society, and they are free to choose, so they do what they want. In the past, the Lemba were strict about not allowing anyone to marry a non-Lemba. As an outsider, if you wanted to marry a Lemba person you would have to convert and become one of the Lemba. But these days people travel and move away from their communities, so you can no longer enforce these rules. You can’t find Lemba meat in Harare, though I can still avoid eating pigs and mice.

How do you see non-Lemba Hebrews, Israelites, and Jews that you have met? Do you recognize anything familiar or feel any affinity?

At first, you look at, say, European Jews, and obviously their culture is completely different, but when you find out more about them, then you begin to understand that there are those two or three basic things that are common among all of us. It’s just that we don’t have the records of who exactly used to do what and how it evolved. I went to the museum in Harare and I saw the Ngoma Lungundu, which means “The Drum That Thunders”—it’s the ceremonial drum that the Lemba say they carried to Africa hundreds of years ago as a symbol of the Ark of the Covenant. Maybe it’s a copy of a copy, maybe it’s not even a correct copy, but seeing it really convinced me that our connections are real: You don’t hold on to an idea for so many centuries unless you are genuinely part of that history.

What about the musical traditions of the Lemba. Do you remember your first exposure to the traditional songs as a child?

The Lemba have kept their music distinct over the years. I can’t say it didn’t change—music always changes and takes on influences, so I’m sure the Lemba music is not exactly the same as it was centuries ago, especially since we adopted the languages of people around us. However, it has kept certain unique qualities. For example, we have not adopted the traditional instruments of the region. Most traditional music in Zimbabwe uses the mbira, but in our traditional music we use the horns and percussion only.

One of the suggested meanings of the word Lemba, according to Tudor Parfitt’s books, is “Those who refuse,” referring perhaps to the Lemba refusing to assimilate, or to eat forbidden foods or to share their culture.

That would make a lot of sense. People use the word Lemba to insult you when you’re being stubborn or obstinate. They’ll say, “You Lemba!”