Makandiwa about his faithful: some will be kneeling but in their hearts they will be standing

reprinted from Bulawayo 24, with minor corrections and additions 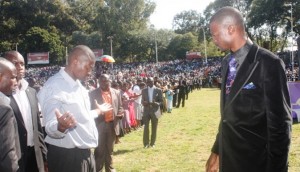 Makandiwa, has banned members of his congregation from kneeling for him as a sign of respect.

Makandiwa told thousands of congregants during a night service at the City Sports Centre that the practice had been misinterpreted as a way of worshipping him by some sections of society.

Debate has been raging in religious circles about Christians kneeling for Makandiwa and other pastors, with many suggesting that UFIC members worshipped the charismatic prophet.

But Makandiwa, affectionately called “Papa” by his followers, rejected claims that people were worshipping him. He said kneeling was only done to show respect to a man of God.

Makandiwa said UFIC members should stop kneeling until Zimbabwean Christians understood the concept. “What do I get when people kneel for me? Nothing. The respect I want is for people to take home the Word of God and repent than to kneel for me. Yet in your heart, you are living a sinful life,” he said. “Therefore, from now onwards, no one should kneel for me until we are all mature to understand the motive behind [the] kneeling.”

He explained that he was aware that apart from outsiders, even UFIC members were questioning why they were kneeling in church in his presence. “Some will be kneeling, but in their hearts they will be standing,” Makandiwa said.

He, however, explained that he would continue kneeling for his spiritual father, Ghanaian Prophet Victor Boateng, because he appreciated the importance of kneeling to a man of God.

The preacher also revealed that he does Boateng’s laundry whenever he is in Zimbabwe. “I wash and iron for my spiritual father. I can do anything for my father because I know what I get from him,” Makandiwa said.

He defended the use of police escorts during Boateng’s recent visit to Zimbabwe, saying it was for safety reasons. “When we met former South African President [Nelson] Mandela, we realised that there were soldiers and policemen guarding his residential place. But we all know that he is loved by the whole world. So if it’s not important to have security, why is such an iconic person being protected?” asked Makandiwa.

At the same time, Makandiwa has stopped using bodyguards during church services and came to the Tuesday service accompanied by a group of pastors.