According to Zimbabwe Mail, Emmanuel Makandiwa last Sunday won a High Court reprieve allowing him to continue selling his spiritual airtime recharge cards to congregants in his church and outside the country. 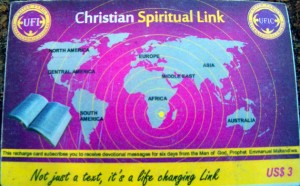 Christian Spiritual Link cards, a service that links Emmanuel Makandiwa with his church members in need of spiritual guidance.

High Court Judge Tedious Karwi ruled that the matter was not urgent, meaning Makandiwa and his church can for now continue selling their cards while the litigation process follows normal channels.

The reprieve follows an urgent application made in the High Court by Pascal Nyasha of Pascal Nyasha Seminars International seeking an interdict barring Makandiwa from continuously selling the recharge cards under contention.

Justice Karwi, who heard the matter in chambers, said the applicants in the matter could still proceed with the litigation and demands for compensation over the concept and its subsequent implementation by Makandiwa.

The matter nearly failed to take off after the defence team tried to argue that they needed time to get instructions from Makandiwa who is in the United States. However, Judge Karwi would have none of that, saying he expected that the defence attorneys would come to court with instructions from their clients.

One Response to Makandiwa reprieved by High Court