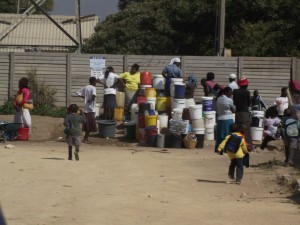 Prophet Emmanuel Makandiwa the founding pastor of United Family International Church (UFIC) has come to the rescue of Chitungwiza community by drilling a borehole at his church stand which is now being utilized by the community.

Members of Chitungwiza community that resides near the church stand that include Unit D, J,E, H and Zengeza 4 are now benefiting from the borehole water.

Residents that spoke to RelZim expressed gratitude to Makandiwa for allowing them access to clean water following the persistent water cuts that have affected them for weeks.

“Personally don’t go to Makandiwa’s church but we were glad to hear that Prophet Makandiwa has ordered security at their church to allow us to fetch water, said one of the residents who identified himself as Tapiwa.

People with buckets and wheel barrows have been making a bee line for the water since the drilling of the borehole.

Makandiwa’s spokesperson Pastor Prime Kufakunesu told RelZim that they are committed to saving lives in many ways.

“Yes we have allowed the community to get access to water at the church stand for water is life and UFIC is there to serve lives,” said Pastor Kufakunesu.

“Water is a God given resource whose access should not be denied to people and UFIC unites all families to God and that is part of our ministry in serving the community.

“In fact that place is being built to serve many and those around it are there to open their eyes for salvation at their door steps.

“Only that when accessing God’s things we must not jostle or be greedy but wait for each other’s turn in an orderly manner as they fetch that water at the holy place.

“The place has to be kept clean knowing that it is there for us and those to come after us,” said pastor Kufakunesu.