Makandiwa speaks about his experience with Living Waters Theological Seminary

reprinted from Nehanda Radio by Takunda Maodza, with minor additions 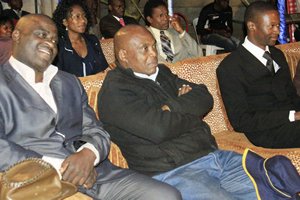 He also opened up on his life, saying he battled for admission to the AFM Zimbabwe theological college and failed to get a place to train as a pastor on three attempts.

Prophet Makandiwa was among dignitaries who thronged Bishop Chipunza’s Number 6 Waddington house in Marlborough, Harare, for the funeral service that attracted hundreds of people, including senior pastors from AFM. Prophet Makandiwa said he persevered until God opened the gates for him. “I applied for admission at Living Waters Theological Seminary on the first occasion and failed to get a place. I applied for the second time without success. I again applied for the third time, but still failed to get a place at the seminary,” he said.

Prophet Makandiwa said he only got the place after his father intervened and literally dumped him at a senior AFM pastor’s house. “My father then took me to Harare [from his rural home]. We went to Waterfalls where he left me at Chipere’s house saying, ‘I am leaving him here until he gets a place at Living Waters.’ Chipere ran around until I was admitted to the college,” he said.

Prophet Makandiwa ranks as one of the most prominent pastors in the country with his church services attracting thousands every Sunday. Makandiwa was recently featured on the 50 Most Influential Africans List compiled by the Zimbabwean Kubatana.net based on a poll among their readers.