Bulawayo residents recently converged at the Guta raMwari church in Lobengula suburb (the incumbent Mayor Thaba Moyo’s place of worship) for a divine service to commemorate the 68thanniversary of Bulawayo’s attainment of city status. 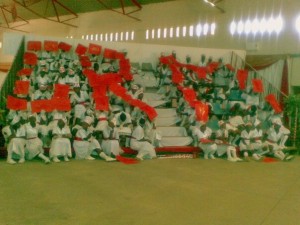 Bulawayo was declared a city on November 4, 1943 and every year a civic and divine church service to commemorate and celebrate this declaration is held at the incumbent mayor’s church on a Sunday near the 4th of November.

According to the latest Bulawayo City Council minutes, the annual civic service held on the 6th of November, was directly organized and facilitated by Mayor Moyo’s Church with assistance from council staff. Other Churches, civic and political leaders in the City of Kings graced the annual occasion.

Guta raMwari Church, with over a thousand followers in Bulawayo, has two churches in Zimbabwe’s second largest city – one in Lobengula and the other one in Mpopoma suburbs.

In previous years, the annual civic service had been held at the African Methodist Episcopal Church (AME), where former mayors Abel Siwela and Japhet Ndabeni-Ncube were members.

The Guta raMwari Church service coincided with the official opening of the Zion Christian Church (ZCC) headquarters in Pumula suburb. The ZCC gathering, that attracted thousands of believers from the neighbouring South Africa, Botswana and other SADC countries, was graced by the top leader of this Zionist Church Dr. Barnabas Lekganyane.