The Welshman Ncube-led MDC last Thursday met with pastors from across Christian denominations in Bulawayo to brief them on the progress made so far by the inclusive government and to also hear their concerns as religious leaders.

Pastor Goodwill Shana, founder and senior pastor of Word of Life International Ministries, also president of the Evangelical Fellowship of Zimbabwe  and Pastor Hussein Sibanda of Christian Alliance of Zimbabwe, attended the meeting.

Earlier this month, the Tsvangirai-led MDC joined Christians from across denominations in Mzilikazi to pray for the Deputy Prime Minister Thokozani Khuphe who is suffering from breast cancer. 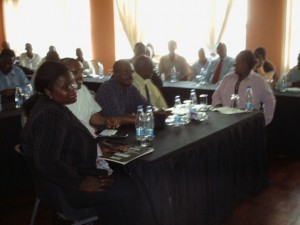 Pastors during the meeting with MDC-N (photo. M. Tshuma).

downtown Unlimited Connect Centre, Prof. Ncube allayed the pastors’ fears that gay rights could find their way into the new constitution. “If you look at the constitutional data gathered and the national reports, the reports are structured this way: there is a narration and a quantifying section which indicate the number of people who would have said something about an issue. Out of the people who spoke about the gays’ issue, there are those who support and those who oppose it. In terms of percentages, I can therefore safely say, looking at that data , there is no way gay rights could find themselves in the constitution.”

He said the percentage of people who want gay rights enshrined in the supreme law is almost zero. “So the simple straightforward answer is that there is no chance of it happening if you go by the wishes of the people who went to COPAC (Constitutional Parliamentary Select Committee) and spoke about this issue. Which means it is no longer needful for Ncube to say what opinion he has on the issue, because the opinion of the people of Zimbabwe is clear.”

Zimbabwe is one of many African countries that have strongly rejected homosexuality as not only ungodly but also unAfrican, with President Mugabe on record as having described homosexuals as worse than pigs and dogs.

Speaking during the same meeting, Regional Integration and International Cooperation Minister, also the party’s Secretary-General, Priscilla Misihairabwi-Mushonga, challenged Churches to participate in the national decision-making process for the general good of the body of Christ. “Decisions are made by those who participate and the Church has to make the decision to participate, otherwise we are going to be sitting here over and over again,” she said.

Mushonga added that the Church, which she described as the conscience of politicians, should have a role to play in resolving issues of injustice and conflict in society, instead of leaving everything to politicians. “I think the Church needs to rethink what its role is in terms of issues of protection and issues of dealing with justice and fairness,” she emphasized.

Church leaders, in turn, reprimanded politicians for always attacking each other in the media and advised them to campaign peacefully ahead of elections slated for next year.

The interactive and engaging meeting, first of its kind, ended on a high note, with religious leaders applauding it as a step in the right direction towards building a strong united Zimbabwe.