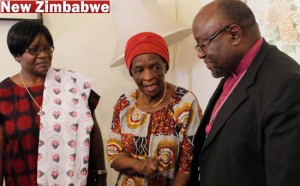 The clean-up campaign, which will also involve Members of Parliament, will be held at Avondale shopping centre, Harare, on Saturday October 26.

Mugabe’s presence at the Gandiya-led Church of the Province of Central Africa (CPCA) function was announced by Speaker of the House of Assembly Jacob Mudenda on Tuesday.

“I wish to inform honourable members that the Anglican Church of the Province of Central Africa and Proudly Zimbabwean Foundation are inviting all MPs to an Anglican Communion clean-up campaign and environmental day to be held at Avondale shopping centre on Saturday from 0800 hours to 1630 hours,” Mudenda said.

“His Excellency, President Mugabe, will attend the event.”

Kunonga, a self-confessed Zanu PF supporter, formed a splinter group, the Anglican Church of the Province of Zimbabwe, after he was excommunicated from the CPCA and went on to seize over 90 properties belonging to the church, including the main St Mary’s Cathedral in Harare, 19 primary and secondary schools and several orphanages around the country.

He, however, lost control of the CPCA to Gandiya in November 2012 following a landmark Supreme Court ruling, ending the pair’s six-year-long fight which sometimes turned violent.

Prior to the Supreme Court ruling, Kunonga, then Mugabe’s ardent follower and favourite clergyman, officiated at several State functions together with the 89-year-old Zanu PF leader, even after his excommunication by the church.

To curry favour with Mugabe, Kunonga would regurgitate the anti-gay rhetoric, citing his intolerance to homosexuality as one of the reasons that caused his fallout with the international Anglican Church body.

Kunonga was officially excommunicated in May 2008, stripping him of his ability to function as a cleric in the Anglican Church.

At one point, Kunonga, who praised Mugabe as “a prophet from God”, was replaced in December 2007 by Bishop Sebastian Bakare.

Kunonga unsuccessfully tried to withdraw his diocese from CPCA sometime in 2007, claiming it was over differences on the ordination of gay priests.

Without the necessary two-thirds majority support, he still went ahead to unilaterally withdraw the diocese and formed his own church.
With tacit support reportedly from Zanu PF, he also went on to seize Anglican property.

Kunonga, who was allocated a farm at the height of his fight with Gandiya, relied on Zanu PF militias to build up his breakaway church, while harassing and intimidating CPCA parishioners.

Meanwhile, Mudenda announced that Parliament would hold its pre-budget consultations in Victoria Falls next week.

“The seminar is an important annual Parliament activity meant to enhance the contribution by members to the process of budget formulation and prioritisation ahead of the presentation of the 2014 National Budget Statement and the passage by Parliament of the Finance and Appropriation Bills,” Mudenda said.