Kwekwe General Hospital, the largest government hospital in Kwekwe recently received a donation of two wheelchairs from a South Africa-based Muslim charitable organisation, the Gift of the Givers. 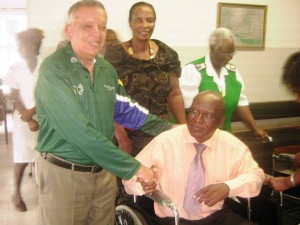 Speaking before presenting the donations, local businessman Abdulla Miya, who represents the organisation and the Muslim community in Kwekwe, said, “We requested for the donation as a family and they responded saying they will give us two wheelchairs.”

Abraham Mtshena, the Kwekwe General Hospital board chairperson who received the donation on behalf of the institution, said that there is work going on at the hospital to modify the formerly children’s ward converting it into a state-of-the-art maternity ward.

“We are targeting affluent people who can afford to pay for such kind of service but are not getting it,” he added.

“I went to South Africa to source for beds, mattresses, televisions and air-conditioners for the new ward. We are targeting the rich to generate more revenue to improve the existing structures,” further said the board chair.

He also revealed that they are in the process of fund-raising towards the procurement of a laundry machine quoted at USD 47,000.

Mtshena said that there are plans to hold fund-raising activities which include a musical show with renowned Zimbabwean musician Oliver Mtukudzi at a date and place to be named.

“We would also look at commercialising the laundry machine and see if this could be sustainable,” added Mtshena.