Prophet Angel agitates Gweru’s poor on his way to Botswana

reprinted from New Zimbabwe, with minor corrections and additions

A Harare evangelist was given a rock-star welcome in Gweru after stopping at a fast-food outlet in his USD 200,000 Bentley.

But Uebert Angel, the founder of Spirit Embassy, left Chicken Inn still hungry after fleeing a throng of “fans” who descended on the restaurant, a newspaper reported.

The bizarre scenes reveal how Zimbabweans – especially the poor – are increasingly enthralled by the sight of crusading prosperity gospel preachers like Angel who now compete with celebrities for public adulation.

The Chronicle of Bulawayo reports that Angel, who was on his way to Botswana, stopped at the restaurant driving alone in the Bentley while four bodyguards drove behind in a Lexus IS sports car.

“They had to dash into their vehicles and flee, leaving their food which was still being prepared after members of the public swarmed the food outlet and started jostling to greet the Harare-based preacher-cum-prophet,” The Chronicle reported.

Angel and his body guards left the restaurant on Main Street and drove to Sixth Street “as the crowd chased after the two vehicles.”

“They then stopped their car at corner Lobengula Avenue and Sixth Avenue where Prophet Angel took about five minutes greeting a handful of determined individuals before driving along the Gweru-Bulawayo Road,” the report added.

The Chronicle says those who managed to “evade the human wall made by Prophet Angel’s bodyguards” – mostly men – “would kneel.. before greeting him.” 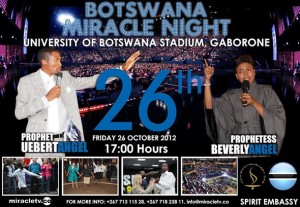 at Boipuso Hall in Botswana’s capital Gaborone, where his followers got a chance to interact with him and his wife, Beverly.

The dinner hosted by Spirit Embassy came hardly a month after Prophet Angel’s brother and Botswana overseer, Lee Angel, had been reportedly deported along with his wife for allegedly robbing his own church of offerings and demanding that the Botswana church raise money to buy his pretty wife a Range Rover.