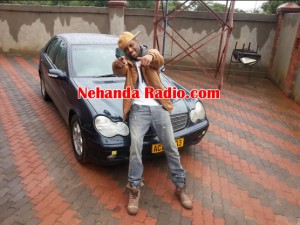 The gift is in recognition of Mudiwa’s impressive musical year that saw him bagging three awards and ministering the Word of God through song. The surprise gift came barely two weeks after Mudiwa donated all the proceeds of his United Kingdom shows to charity.

Mudiwa said the gift came as a surprise and he showered praises on Angel.

The young musician said he was still to decide on what to do with his previous ride – a Mercedes Benz C200.

Prophet Angel’s gesture was met with mixed feelings from the public. Some blasted him for splashing money on triviality rather than assisting underprivileged people in society. “Amazingly, great people of God!!! Just right at the base of Harare Central Hospital women are dying giving birth to future prophets and you find it justified to exhibit your Mercs on the net. A child in your hood and village has just slept without food.” said one believer.