The Salvation Army in collaboration with the Ministry of Women’s Affairs, Gender and Community Development have called on people to participate in observing the third year of advocacy against gender-based violence and militarism. 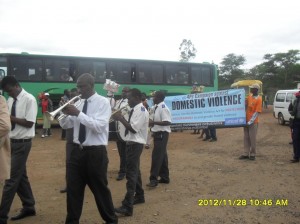 Speaking at a pre-launch campaign of 16 days of activism held in downtown Kwekwe, Midlands Province, this week the band master for Salvation Army in Torwood (suburb of Kwekwe), Kufatineyi Ngwenya, said domestic violence was an obstacle affecting church organizations.

“As a church organization, we are saying NO to gender-based violence. In cases where parents are always fighting, children are affected to the extent that even the church attendance will be poor.”

In an interview with Relzim.org, Jethro Gwamure, who attended the function, hailed the Salvation Army for participating in such event. “The Salvation Army Church’s efforts to collaborate with other organizations to end domestic violence are essential since the message will reach people from various walks of life. There should be total elimination of violence against women, men and children for us to have a violence-free society,” he said.

The Torwood church band of the Salvation Army, known as Brass Band, entertained the crowds that attended the event with such songs as ‘Alpha and Omega,’ ‘Jerusalem,’ and ‘Oh! Boundless Salvation.’