Just before the year 2011 made it’s exit, the Nehanda tree was involved in a third accident after a silver Nissan ElGrande hit into the remaining tree stump.

This comes after the tree fell about a month ago, when a municapality truck bumped into it and knocked it over. The tree has since been hit by a second and now third vehicle. Though the details around the most recent accident are sketchy, Zimbojam reports that the accident happened around 9:30pm on Thursday December 29th. 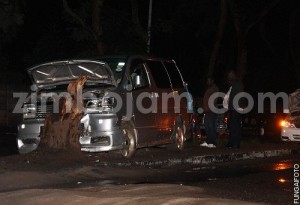 We recentlypublished an article about the second accident, during which a construction truck carrying river sand crashed into the tree. This story article sparked some debate, with one reader sending a very passionate response. In order to reply the reader’s questions and to clarify my stance, I then went onto reply the reader’s comments in another article.

The question of whether Nehanda is a Shona hero as opposed to being a Zimbabwean hero is one which may be debated about for a long time, and it seems as if the end of tribalism is in sight, but still not anywhere near.

However the fact of the matter remains: the tree and the place in which it stood hold enormous symbolic value to Zimbabweans. Whether good or bad, Mbuya Nehanda has a legacy which cannot be ignored. Right now the issue that we should be focusing on is the preservation of the tree (which is still lying inside the Heroes Acre entrance) and the spot on which it stood.

Despite reports that Mbuya Nehanda was actually hung at another location, many Zimbabweans have brushed it off saying they still believe that she was hung at the mythical tree and not in Africa Unity Square as it has been suggested.

The latest accident may just be another non-event or it could possibly be a sign that we need to know and aknowledge those who laid the path to the freedom (including ‘freedom of speech’) which we all enjoy today.