Traditional leaders urged to be impartial 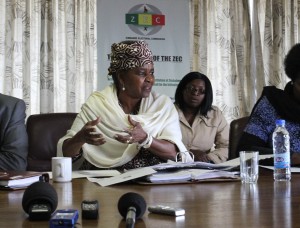 The Zimbabwe Electoral Commission (ZEC) says traditional leaders should work towards the conducting of peaceful, free and fair elections in the country by adhering to their roles as prescribed by the constitution.

In an address to representatives of traditional leaders in the national chiefs council at a ZEC organised meeting in Harare yesterday, the electoral body’s deputy chairperson Joyce Kazembe said chiefs as stakeholders in the country’s electoral processes, must be wary of the fact that their institution could be hijacked by political parties.

Kazembe said the new constitution reads like a code of conduct for traditional leaders on issues of a political nature and that it was therefore ideal that chiefs be aware of the provisions so that the electoral process is not discredited on the basis of failure to behave in a manner that is consistent with the supreme law.

Kazembe added: “They should treat all persons within their areas equally and fairly and that they should not act in a partisan manner, further the interests of any political party or cause and or violate the fundamental rights and freedoms of any person.”

Kazembe also encouraged the traditional leaders to continue urging their subjects to register as voters and inspect the voters’ roll up to the last day of voting on July 9 so that where voters have moved to new wards their transfer can be effected.

“We have also activated our media monitoring committee. Last week we met with personnel from various media houses to advise them of the law that places their conduct under the surveillance and scrutiny of ZEC but they are stubborn as they concentrate on issues that do not help to build the nation,” she said.

President of the council of chiefs Fortune Charumbira advised the electoral body that the election of members of the Council, who will in turn be elected to Senate in terms of the new constitution, was the duty of ZEC as opposed to the Local Government ministry as had been enunciated by ZEC.

This came after ZEC commissioner Sibongile Ndlovu had told the traditional leaders that President Robert Mugabe had in his election date proclamation indicated that members to the council of chiefs would be elected on July 12 according to the Traditional leaders Act.

But Charumbira said traditionally the election has always been done by the registrar general’s office and hence like all other elections it should be presided over by ZEC.

“From experience, local government officials who have been helping the registrar general’s office have shown to be interested parties. They cannot therefore run these elections because over and above that, the new constitution is explicit that ZEC runs all elections, there should be no debate about that,” said Charumbira.

Charumbira also urged ZEC to consider including traditional leaders as members of the multiparty liaison officers in conflict management as they were the ones who are always in the communities where conflict starts.