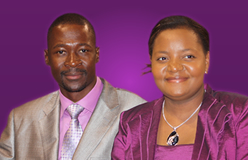 United Family International Church  women’s division on Sunday, officially handed over to the ministry five luxury coaches valued at R6 million (about US$600 000), which they bought through their internal fundraising ventures.

The buses include two double-deckers and three state-of-the-art luxury coaches.

She told thousands of congregants at the City Sports Centre in Harare who included visitors from South Africa, Zambia, Kenya, Uganda, India and the United States of America that the five buses were a result of hard work and targets that UFIC women set at the beginning of this year.

“We agreed that we would do an amazing thing and we also agreed to work on a project that would put the devil to shame. So, from January till June, the women in the church fund-raised”, said Prophetess Ruth.

She also thanked the men in the church for creating an enabling environment.

“God enabled us to buy these buses, but we are very proud of the men in the church, because they stand by what the women are doing.

“When we started in January, we told ourselves that as victorious women, we would prevail and that victory belongs to us. We knew that with God, everything is possible,” she said to cheers and applause.

In an interview with The Herald, UFIC official spokesperson, Pastor Prime Kufakunesu thanked the women for going the extra mile in ensuring that the gospel is preached.

He said the church’s executive would soon decide how the buses will be used adding, “It was the women’s vision to buy the buses.

“They have officially handed them over to the ministry.  It’s the ministry that will make the final decision on how they will be utilised . . . But the women’s gesture goes to show how much power the girl child has. It’s now unfolding before our eyes.

“In the past, all eyes were on the boy child, and the girl child was neglected. In the event of having school fees for one child, it’d always be the boy child. But, this goes to show that God does not discriminate on gender basis”.