reprinted with additions from the Ledger-Enquirer by Robin Trimarchi 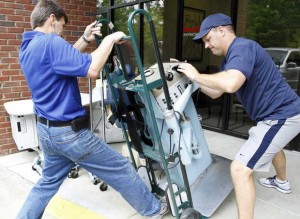 About a dozen US volunteers filled a shipping container with medical equipment and supplies recently at the West Georgia Eye Care Center to ship to Zimbabwe in support of ophthalmologist Dr. Stephen Beaty‘s mission work to restore sight to the blind.

Beaty, a surgeon with the center, left for Bulawayo earlier this month and will spend four months in partnership with the Mater Dei Hospital performing cataract surgeries. He will set up “eye camps” in rural areas to screen, diagnose and fit eyeglasses for people in dire need of medical attention. He already has seen more than 100 patients at a rural church.

Operating tables and chairs, intravenous chairs, diagnostic equipment and supplies needed to create exam rooms and operating rooms will be shipped to Bulawayo via an Air Force cargo plane. 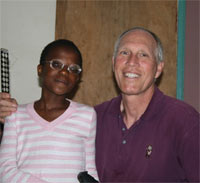 Dr. Stephen Beaty was able to outfit this young girl, with minus 16 diopters of nearsightedness, with donated eyeglasses, immediately improving the quality of her life. (Photo courtesy of African Hunting Gazette).

Retired Columbus ophthalmologist Dr. Balbir Chhokar donated equipment from his practice. Alcon Medical Missions donated a USD 40,000 machine that allows doctors to make a micro incision in the eye, dissolve the damaged lens, and place an intraocular implant that restores vision within a day.

About 145,000 people in Zimbabwe suffer from eye disease, according to Dr. Phillip Mitchell of Knoxville, Tenn., a friend and colleague in medical mission work with Beaty. “The underlying premise of what we’re doing in Africa is that we are treating one of the diseases that will take people from 100 percent disability to 100 percent working,” Mitchell said.

The AIDS epidemic has left the country with nearly half of its population under 15 years old, said Mitchell, so putting adults back to work and in charge of their families is essential. It costs $25 per person to cure blindness, and it adds years of quality life, he said. “This has a global effect,” said Misty Kearney of the West Georgia Eye Care Center, “and it’s a wonderful thing to be a part of.”

Beaty grew up in Zimbabwe, where his parents were missionaries. He took his own family there in 2000, where they lived and worked through 2004. He returns annually, doing mission work in connection with numerous international groups. St. Francis Hospital has recently formed a sister hospital relationship with Mater Dei Hospital (run by the Franciscan Missionaries of the Divine Motherhood since 1950), and Beaty is part of their Community Mission and Outreach Team.

“We both speak the language because we came from there,” Mitchell said. “It made natural sense for us to go back.”

In 2011, Dr. Stephen Beaty also travelled to Mozambique, where he set up an “eye camp” in a reed hut in order to examine patients in a remote fishing village.