Vice President  John Landa Nkomo, has paid tribute to missionaries for setting up schools in the country’s rural areas, saying that has boosted Zimbabwe’s education system which is ranked among the best in Africa. 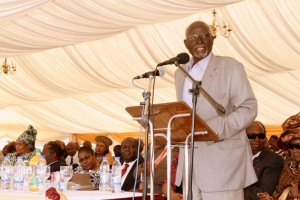 The Vice President was speaking in Nyamandlovu (a semi-arid marginalised area in Matebeleland North) recently during the joint graduation and birthday party for Mines and Mining Development Minister, Dr. Obert Mpofu. “The coming of missionaries helped in bringing education to the people. Had it not been for them we would still be in darkness,” Nkomo said.

A number of missionary schools built across Zimbabwe before independence, most of which are reputable boarding institutions serving the rural people.

Zimbabwe today boasts the highest literacy rate of 92 % in Africa (slowly declining as of recently, however). Its academics that are all over the world are occupying influential positions in different sectors of the economy.

VP Nkomo went on to thank Mpofu, also Member of the House of Assembly for Umguza Constituency for the support he was giving to schools in his constituency in the form of renovations.

Mpofu, who turns 60 this year, graduated with a Doctorate in Policy Studies from the Zimbabwe Open University  late last year, hence the historic joint celebrations held at his state-of-the-art rural home.

The grand occasion was graced by top ZANU-PF politicians from the three Matabeleland provinces and others from across the country as well as members of the Johane Masowe Apostolic church.