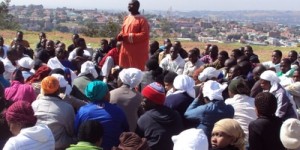 Recovering stolen motor vehicle, healing the terminally ill and women who have been barren for decades, fortifying marriages and giving lucky charms to the desperate is the daily routine for Dube, who operates from a hill in Yeoville, near central Johannesburg .

However, it is the way in which Dube does his prophesying that has made him an instant hit with the predominantly Zimbabwean worshipers in South Africa , who have turned to religion for survival in a country where the difference between life and death can be a very thin line.

2 Responses to Zimbabwean preacher does miracles in South Africa