Eid Milad-Un-Nabi marks the birthday of Prophet Muhammad. It may seem strange to non-Muslims, but many Muslims do not believe in celebrating birthdays or death anniversaries because there is no historical evidence that Prophet Muhammad ever did this. 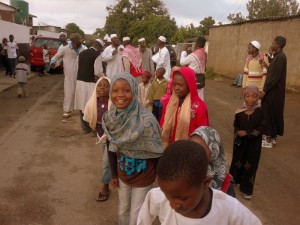 Despite this, large numbers of Muslims do commemorate the birth anniversary of the Holy Prophet, which falls on 12 Rabi-ul-Awwal of the Islamic lunar calendar.

During these celebrations some Muslims donate to charity. Families gather together, feasts are arranged and food is served to guests and the poor.

Mbare Islamic Society also celebrated the great feast this year. The Society is headed by Sheikh Abdullah Saidi Mangochi. Mbare Mosque is one of the oldest mosques to be built in Zimbabwe. It was built under the guidance and tutelage of the late Sheikh Habib Chitenje. The late Sheikh Chitenje contributed immensely to the development of Muslims. He was instrumental to the construction of various mosques in Zimbabwe.

This years’ guest speakers during the celebrations in Mbare were Sheikh  Anubi Twabi and Sheikh Abdullah Sikacha. Various people attended this gathering from all over Zimbabwe: some from as far as Kariba and Empress mine in Kadoma.

This marked the beginning of the  Milaad season where it will be celebrated in various places throughout Zimbabwe in the next three months.

Ibrahim Mpache is a Muslim activist. He is the Chairman of Istiqamah Foundation as well as the Information Secretary for Zimbabwe Muslim Youth Organisation. He writes this for this blog in his personal capacity.