Opinions differ on reasons for proliferation of Churches in Zimbabwe

September 26, 2011 , published in In the Churches Blog   by Sinikiwe Mlambo

The proliferation of Churches has left many people wondering on whether Christianity in Zimbabwe is being taken by greedy individuals who are in it to make money. 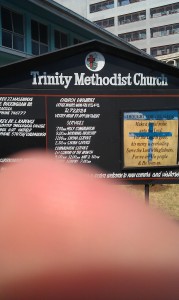 Trinity Methodist church in central Harare. As of recently, there are four Methodist Churches in Zimbabwe.

RelZim.org interviewed people in Harare who expressed concerns over the Churches mushrooming and shared fear that people may lose focus of the real issues having to do with Jesus Christ.

“People are now in religion to make money, if you go to a church you will see that the teachings are now focusing on material things. But the Bible warns against pursuing both God and money. It’s clear that as a people we have lost the direction,” said Innocent Ndebele from Highfields in Harare.

Rebecca Maripo said that there is need for people to question whether they are still following God or they are now just interested in power and miracles. “The reason why people are forming Churches everyday is that they are now power-hungry. People want to be on the top and do not want to be told what to do. That is why you see these churches being formed everyday.”

Apart from the Methodist Churches, there two factions of the Anglican Church (one led by renegade Bishop Nolbert Kunonga and the other one by Chad Gandiya). As for the Apostolic Churches, there are countless formations of those.

Emmanuel Mukundwi thinks that it is, actually,  good to have many Churches as this allows us to experience various dimensions of God. “There is nothing wrong with Churches splitting as long as they preach the Gospel of Jesus Christ.”

Moses Mabiza agrees with Mr. Mukundwi by saying that it is part of the spiritual revolution. “Look at prophet Makandiwa: when he was still in AFM he was restrained. But now he can reach all corners of the country because he chose to form his own Church. It just shows that the Gospel is going everywhere,” elaborated Mabiza.

Whereas respected academic Gordon Chavhunduka attributes the split of Churches to the material things. “It’s a power struggle. People just want to be in authority and, whenever they feel that they have the following, they form their own Church.”

The proliferation of churches has left many people wondering on whether Christianity in Zimbabwe is being taken by greedy persons who are in it to make money.