Members of Mayobodo’s Our Lady of Loreto Roman Catholic parish under St Anne’s Brunapeg Mission near the Botswana border (Matabeleland South), have bemoaned the departure of the Franciscan Capuchin fathers in the area saying it has dealt a heavy blow on the growth of the rural church and weakened people’s faith. 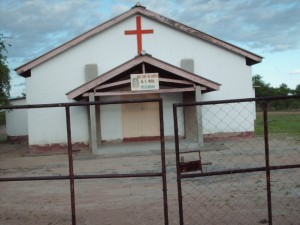 Mayobodo’s Our Lady of Loreto Roman Catholic Church, an out station of Brunapeg Mission in Mangwe District of Matabeleland South under Bulawayo Archdiocese (photo M. Tshuma).

The Franciscan Capuchins of the Province of Tamil Nadu in India who had been taking care of the 58-year-old Brunapeg Mission since 1989, handed over the mission serving the Kalanga community back to the archdiocese of Bulawayo in 2005.

Parishioners said since the departure of the Franciscans and the taking over by the diocesan priests, things have completely changed especially at Mayobodo and other outstations, a situation which had seen the faithful missing some of the monthly Masses under unclear circumstances.

Believers who also did not have the special Christmas mass in the year that just ended, revealed that diocesan priests at the mission lying 30 km away sometimes demand money for fuel from the poor parishioners, something that they said has put off many Catholics.

They said the membership which was promising during the times of Capuchin Fathers Amar and Bosco has since declined to alarming levels with a number of members having defected to other churches, while others no longer come to church.  Some Sunday services the villagers said could be attended by as few as five people.

When Father Bosco left Brunapeg Mission in 2005, a diocesan priest Fr Kelvin Mtunzi took over only to be later succeeded by the incumbent  Fr Innocent Ndlovu, following the former’s elevation to the post of Vicar General at St Mary’ Cathedral in Bulawayo.

The church building is in the declining state. The Blair toilet project at the church site has since been abandoned as parishioners are reluctant to finance it. Broken window panes of the 12-year-old church building have also not been replaced. Fr Amar (left) with the fellow Capuchins in Entumbane, Bulawayo, where his order runs a parish

The Mayobodo Catholic Church building, adjacent to Mayobodo Primary School and a few kilometres from Khalanyoni business centre, was blessed and consecrated by Archbishop Emeritus Pius Ncube in July 1999.

Along with this one, other churches built by Capuchins in the area include Makorokoro, Maninji and Mabuledi to mention a few.

The situation that the Catholics face in Mayobodo is representative of the tendency throughout the country for Catholic parishes  (especially in the rural areas) to experience hardship after the departure of missionaries. Part of the issue is the fact that local diocesan clergy still needs to develop a system of international funding that normally supports the missionary activity of international monastic orders.