After leading the Roman Catholic Archdiocese of Bulawayo for a decade, Archbishop Emeritus Pius Alick Mvundla Ncube, the first and only indigenous black archbishop to be at the helm of Matabeleland’s biggest Catholic diocese, resigned from the post. 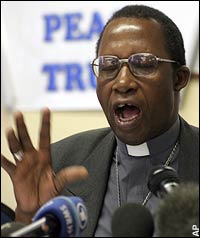 This archbishop prematurely left office on September 11, 2007, barely two months after a Bulawayo man, Mr. Onesmus Sibanda, filed a 20 billion ZWD (1.3 million USD at the official rate and 154, 000 USD  at the parallel market) adultery lawsuit against him. Mr Sibanda was accusing the Roman Catholic leader of having an adulterous affair with his wife, Mrs. Rosemary Sibanda – allegations Archbishop Ncube’s lawyers believed were politically motivated.

In the month of July 2007, images purporting to be of the Archbishop and Mrs Rosemary Sibanda in the clergyman’s bedroom were published in The Chronicle, a Bulawayo-based daily, and other state-controlled newspapers, a development that made copies of the The Chronicle become a scarce commodity as residents scrambled for them daily.

The government-controlled Zimbabwe Broadcasting Corporation (ZBC) repeatedly showed the video footage of the man who looked like Pius Ncube having an affair with a woman, a development that forced the Archbishop out of office. Archbishop Ncube was quoted in the press as saying he had to resign because of “vicious attack not just on myself but by proxy on the Catholic Church in Zimbabwe.” He added he opted to leave office in order to “spare my fellow bishops and the body of the Church any further attacks.”

At a press briefing, the day Archbishop Ncube was issued with summons, Mr. Sibanda’s lawyer, Munyaradzi Nzarayapenga of Dube-Banda, Nzarayapenga and Partners, told journalists in Bulawayo that the plaintiff, who had suspected the respondent was having an affair with his wife, hired a private investigator who managed to get photographs of Ncube and his wife in the former’s bedroom.

The now deceased Mrs. Rosemary Sibanda,  who was a member the Catholic Church and a secretary of St. Anne’s Association at St. Pius’ Njube Parish, had later confessed in the public media to having been involved in the alleged adulterous affair with the clergyman. (See The Chronicle 17 July 2007). After Archbishop Pius Ncube’s resignation from the bishopric, Fr. Martin Schupp of the Missionaries of Marianhill was appointed Apostolic Administrator for the Bulawayo Archdiocese until 20 June 2009, when the current Archbishop Alex Thomas was finally appointed.

During the 10 years at the reigns of Bulawayo Archdiocese, Archbishop Ncube, an outspoken critic of President Mugabe, advocated for the respect for human rights, democracy and good governance in Zimbabwe. At one point in time, he however stunned many Christians across the globe when he made international headlines in the press saying he was praying for the death of President Mugabe. “I am praying that he goes home gently. At 84 he has lived a full life,” he said in 2005 (See The Chronicle 17 July 2007).

This Catholic prelate received a number of awards for fearlessly fighting for the recognition of human rights and fundamental freedoms. Such awards include the Robert Burns International Humanitarian Award that Pius Ncube received in Scotland in 2005 (See The Chronicle 17 July 2007).

Born on 31 December 1946 to a peasant family in Filabusi, Matabeleland South, Pius Alick Mvundla Ncube went to a Presbyterian primary school in Mbonqane area, west of Bulawayo. He later moved to the Roman Catholic St. Patrick Primary School in Makokoba, Bulawayo for his upper primary school from 1954 to 1962. For his secondary school, Pius Ncube went to Chikwingwizha Secondary School, another Roman Catholic institution in Gweru, between 1963 and 1966 (See The Chronicle 17 July 2007). In 1967, Pius Ncube enrolled at Chishawasha Serminary, outside Harare, where he studied Philosophy and Theology until his ordination as a Catholic priest in 1973. He later earned his licentiate (graduate degree) at the Vatican after completion of his post-graduate studies in Pastoral Theology. 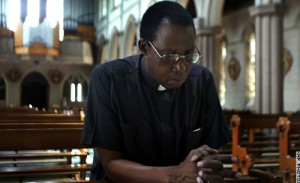 Afterwards Pius Ncube worked at St. Joseph’s Mission in Kezi/Matobo District, Empandeni and Embakwe Missions in Mangwe District and at St. Mary’s Cathedral in Bulawayo (See The Chronicle 17 July 2007).  It was in 1998 when the then Fr. Pius Ncube made history when he was ordained the first black Archbishop of the Bulawayo Archdiocese, taking over from Henry Karlen, a Swiss. Archbishop Karlen had led the diocese for 23 years from 9 May 1974 until he retired on 24 October 1997. In December 1997, prior to his ordination in early 1998, Pius Ncube told The Chronicle, “I never thought that one day I would lead a 120,000-member Roman Catholic diocese, reporting directly to the Pope” (See The Chronicle 17 July 2007).

Archbishop Emeritus Pius Ncube now makes his home in Dete in the Hwange Diocese and continues to appear at the important gatherings of the Roman Catholic Church. In an August 2012 interview, Archbishop of Harare, Robert Ndlovu, said that he visits Pius Ncube “practically every time” that he visits the western part of Zimbabwe. “He was given a life of prayer and from time to time he says mass to a limited number of people who would know him.” “The decision about Archbishop Pius Ncube is a decision that had to be made by Rome not by a bishop here about how he has to proceed from now on,” added the Archbishop of Harare.