Davison Kanokanga is a senior pastor, lawyer, arthor and marriage counselor. He is a founder of one of Harare’s young, but vibrant Pentecostal Churches Impact Christian Centre (ICC) and runs his own legal firm, Kanokanga and Partners. 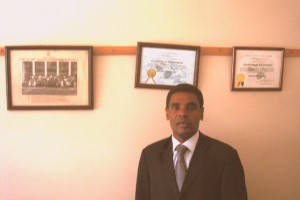 Pastor Kanokanga was a senior member of ZAOGA for 25 years, where his wife was a pastor. Pastor Kanokanga received a calling and started The Marriage Centre, counseling people on marriage issues from a Christian perspective.

To date, Pastor Kanokanga has written seven books: Before you tie the Knots (a pre-marriage manual), Keeping Your Marriage Intact and Your Marriage can work among others.

While on visit to the United Kingdom in 2009, Pastor Kanokanga says it became clear to him that it was about time for him to start his own ministry and decided to leave ZAOGA to form ICC. He left ZAOGA amicably – Church leaders and pastors there understood that he had received a calling.

He set up ICC in 2010. Pastor Kanokanga told Relzim that he is able to balance his work as a pastor, lawyer and marriage counselor. He is a hardworking and highly disciplined individual who is able to manage his time well.

His wife, Gwen, a pastor in her own right, handles most of the church-related events and sessions. At the legal firm, a legal assistant handles some of the court cases, thereby enabling Pastor Kanokanga to attend to his office work.

Pastor Kanokanga advises the following to young people who plan to go into marriage: they need to understand that the institution of marriage is a lifetime commitment. So they must not go into it blindly or ill-advisedly. Instead of focusing on identifying the right marriage partner, the youths should do their best to become good candidates for marriage.

Born in 1965, Pastor Kanokanga grew up in the Murehwa and Mutoko areas in Mashonaland East. He did his secondary education at Prince Edward School in Harare before enrolling for his Bachelor of Laws and LLB degrees at the University of Zimbabwe between 1985 and 1988.

In 1989, he joined the private practice and set up his own legal firm by June 1991. He did a two-year diploma in theology with Africa Multination for Christ Institute.