Reverend Julius Zimbudzana is a priest in charge of  the Anglican parish in Harare’s Highlands. He is 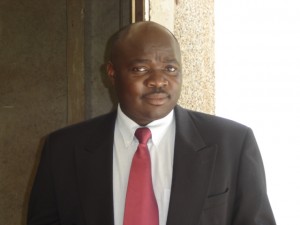 one of the priests facing persecution by those acting on the instructions of the ex-communicated Bishop Nolbert Kunonga, the former head of the Diocese of Harare and now self-proclaimed Archbishop of Zimbabwe.

He was arrested in September this year  by Highlands Police for allegedly taking over Anglican church property worth over US$1,5 million, charges dismissed by the Church of the Province of Central Africa (CPCA) as unfounded and a mere persecution.

Rev. Zimbudzana said his persecution and that of other members of CPCA has been going on for long now, with the first attack on him coming in December 2010 when one Mangava (a Kunonga priest) locked the church, office, hall and library claiming that he was the new rector.

In June,  Mangava and one Gezai violently evicted a deacon who was using one of the houses within the church premises, threatened to stab Rev. Zimbudzana  with a knife and broke the front door using iron bars.

On June 1, eight people were send to evict Zimbudzana, but the plan failed as other members of the clergy attending a meeting  in town came to his rescue. Rev. Zimbudzana said he kept phoning the police for over an hour. The latter kept on saying they were coming but they had no transport. “When they arrived one officer agreed to get a statement from [me] as to what was happening. When he was about to finish there came riot police from Harare central. They asked us what was happening. We explained to them, then they ordered us to go to the charge office to make statements. To our surprise, when we got to the charge office we were told to take off our shoes since we were going to be detained. Thirteen of us were detained including my mother, three priests and nine church wardens. We were later charged with “criminal nuisance” after spending a night and a day in the cells.”

Rev. Zimbudzana said in September the same Mangava made a false report that the former had stolen church property worth US$1,5 million. Zimbudzana tried  to explain to the police that the only property  he  took was his personal property. “When I went to the police I was informed that they had an instruction to detain me. Actually, on the docket, there was an instruction written in red pen which read  “find,  arrest and detain Zimbudzana.”

Rev. Zimbudzana said the ordeal in police cells was unbearable to his family, with his eight-year-old son having  developed terrible headaches as a result of this, while the mere mention of the police coming to him for  anything now makes him to become very violent followed by heavy nose bleeding. His 17-year- old  daughter who is sitting for her public examinations this month, is also now living under stress after  she was verbally abused by one Brown Gwedegwe.

“We now live in fear because one police officer told us that he was 100% behind Kunongas thugs. A youth chairman by the name Chisadza gives orders to the police as to what and how they should conduct their duties,” said Rev. Zimbudzana.

At one point, he was locked out outside his gate and it was only after the intervention of the  then officer in charge of Highlands police station that he was allowed into his house.

Rev. Zimbudzana said, as CPCA, they have resolved to go on with their lives. He said, for as long as the system is what it is, there will never be justice on their  side.

The Anglican priest said  reasons given by Kunonga for taking CPCA  property are baseless. “He has politicized an ecclesiastical issue since he refused to be disciplined by the organisation he was working for.”

Born in 1974 in Harare in a family of four, Rev. Zimbudzana grew up in Glen-Norah. He went to Zuvarabuda primary school and Glen –Norah High before studying theology at Bishop Gaul College in Harare from 1996 to 1998.

He now holds a master’s degree in religious studies and a post-graduate diploma in project planning and management from the University of Zimbabwe.

Rev. Zimbudzana was made deacon at the end of 1998 and served deaconate at St. Paul’s Marlborough before being ordained into the priesthood in 1999. He served as an assistant priest in Mazoe valley for three years before becoming rector of the same parish.

He has also served as priest in Makonde, Mashonaland West and Mt Pleasant’s All Souls between 2004-2008. Between 2004 and 2007, he was Bishop Gaul College Dean of Studies, before being appointed principal there from 2007 to 2008. From 2008 till present, he has been the parish priest in Highlands.