According to a recent article in the New York Times, Nolbert Kunonga, an excommunicated Anglican bishop and staunch President Mugabe ally, has escalated a drive to control thousands of Anglican churches, schools and properties across Zimbabwe and southern Africa.

“The throne is here,” declared Mr. Kunonga, who has held onto his bishopric in the sprawling diocese of Harare through courts widely seen as partisan to Mr. Mugabe. He has also been backed by a police force answerable to the president, whom Mr. Kunonga describes as “an angel.” 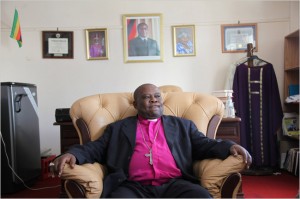 Nolbert Kunonga in his Harare offices (photo by The New York Times).

Chad Gandiya, who was selected by the Anglican hierarchy in central Africa to replace Mr. Kunonga as bishop of Harare, said he was baffled by the support for Mr. Kunonga from state security services since the church that Bishop Gandiya leads is apolitical: “It’s not Kunonga we find at the church gates, it’s the police. It’s not Kunonga who drives us out, who throws tear gas at us, it’s the police. When we ask them why, they say they’re following orders.”

But there was no need for violence, Mr. Kunonga said, because he was already winning the legal battle to control church properties.

“You must have a very good reason to kill people,” he said. “Being a political scientist, I know who to eliminate if I wanted to physically, and to make it effective. I’m a strategist.” Mr. Kunonga added, “If I want to pick on people to kill, Gandiya would not survive here.”

Mr. Kunonga’s aim, he and his adviser, the Rev. Admire Chisango, said, is for their breakaway Anglican Church to control about 3,000 churches, schools, hospitals and other properties in Zimbabwe, Zambia, Botswana and Malawi — a treasure accumulated since Anglican missionaries first arrived in what is now Zimbabwe during the 19th century.

One of Mr. Kunonga’s bishops, accompanied by the police, went to the Daramombe mission in Masvingo Province last month and asserted Mr. Kunonga’s authority, threatening to fire those who did not submit, Godfrey Tawonezvi, bishop of Masvingo, told his fellow bishops in an April 30 e-mail. The police repeatedly returned to the mission, questioning the priests.

Most Anglicans in Harare have remained in congregations under Bishop Gandiya and the global Anglican Communion. They have been barred from worshiping in Anglican churches, gathering instead in rented churches and schools, open fields, even cemeteries. The police have interpreted court rulings as giving the Kunonga faction control of church properties.
The archbishop of Canterbury, the Most Rev. Rowan Williams, who leads the Anglican Communion, wrote Mr. Mugabe this year, beseeching him to stop “the continuing bullying, harassment and persecution” of Anglicans in Zimbabwe — but received no reply, the archbishop’s press secretary said.

One recent Sunday morning, the magnificent Anglican Cathedral in downtown Harare, once thronged by thousands of congregants, was mostly empty. Mr. Kunonga sat among a smattering of parishioners. Not far away, a thousand Anglicans packed a plain rented church not under his authority. Beneath bare light bulbs dangling from unfinished rafters, they joyously danced and sang to the beat of drums and listened raptly to their charismatic young priest, Barnabas Munzwandi. As the priest’s voice wafted into the yard outside where the overflow crowd sat on the grass, Victoria Ngwere, a 38-year-old housewife, explained that she had pushed her son, Raymond, miles in his wheelchair to get to services rather than attend a Kunonga church nearer her home.
“Here I can feel free,” she said.