Makandiwa was up and Kunonga down —  What were the other Top 10 Stories of 2012? 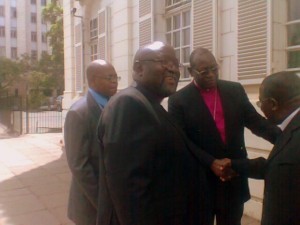 Bishop Chad Gandiya (centre) smiling after he won the ownership of Anglican Church property case in Harare this year. This Supreme Court decision ended the six-year dispute between led by him Anglicans and Nolbert Kunonga’s Church of the Province of Zimbabwe. (Photo: M. Chibaya)

1. Kunonga lost it all. In November, a Supreme Court decision ended the six-year dispute between the Anglicans led by Bishop Chad Gandiya and Nolbert Kunonga’s Church of the Province of Zimbabwe. Gandiya invited Kunonga and his camp to rejoin the Anglican church. Kunonga turned down the invitation.

2. Makandiwa got international acclaim … but local problems. Closer to the end of the year, Pan-African publication New African named Prophet Emmanuel Makandiwa one of the 100 most influential Africans in the Religion/Traditional Leader category. In April, tourism minister Walter Mzembi described Prophet Makandiwa as a tourist attraction, who draws huge crowds to his congregations. Zimbabwe’s First Lady  Grace Mugabe named a child in her orphanage after Makandiwa to raise funds.  But three Zimbabweans  have sued Prophet Makandiwa‘s UFI church for allegedly encroaching on their commercial stands while building its multi-million-dollar chapel in Chitungwiza.

3. Sex scandals and corruption reached new levels. Dr Goodwill Shana of the Anti-Corruption committee publicly stated that “corruption is rife in the Church” of Zimbabwe, while traditional healers, self-proclaimed prophets and church-operated schools got into the public eye as abusing children and women. One ‘prophet’ in Plumtree was attacked by a manwhose wife he allegedly had had an illicit affair with. The Harare City Council investigated cases in which churches were said to be using their premises for commercial purposes. 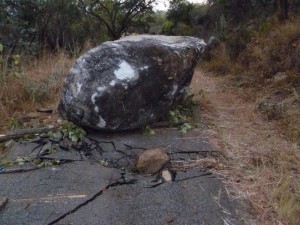 A balancing rock fell from a hill top in the Matopos park in June 2012. This prompted a group of Zimbabwe’s spirit mediums to hold a traditional cleansing ceremony in the park. (Photo: Paul Hubbard).

4. Zimbabwe’s leading faith: syncretism. In an interview this year, Catholic Archbishop Robert Ndlovu stated that the Cross is still a bit foreign to many Zimbabweans. “Generally our people have a problem with countering evil spirits and issues of witchcraft. We have not really been converted in that area,” he desribed the practice known as “syncretism,” the combining of different (often seemingly contradictory) beliefs. The Nehanda tree accidents (that started drawing media attention late 2011) and the cleansing ceremony in Matopos National Park that followed the fall of a balancing rock are examples of such. For all the different faiths in Zimbabwe see this page.

5. Health education battle still on. Leaders of various faiths groups in Zimbabwe went through health communication trainings. This included 300 traditional health practitioners roped in by the national AIDS Council and the Ministry of Education, as well as 34 pastors gathered  by the Evangelical Fellowship Zimbabwe, Methodist Development and Relief Agency, and Union for Development of the Apostolic Churches in Zimbabwe (UDACIZA). To counterbalance some members of Apostolic churches shunning Western medicine as something that diminishes their supernatural powers, UNICEF trained almost 400 Vapostori as health practitioners.

In 2012, Shia Muslims opened a mosque in Harare. But Islamic mission centers lack funds outside the capital city. About 1% of Zimbabweans (100,000) are Muslim and the community is still vastly supported from outside Zimbabwe.(Photo: Islamic Culture and Relations Organization in Harare)

6. Banks get religion. Having experienced what poorly planned international trips mean, Catholic youths started well in advance to get ready for the next WYD to take place in 2013. TN Asset Management was the financial institution that helped them make a good plan, while Nicoz Diamond launched Christian Sure to cover for church assets.

7. Catholics at the forefront of indigenization. The transition from foreign-born missionaries to local clergy has been continuing within the Catholic Church in Zimbabwe, with some bumps along the way. Ordination of Franciscan priests, the increasing number of diocesan clergy in Gweru and young Jesuits taking over key posts in

Zimbabwean province are all signs of the local church coming out of age. Some of the challenges were cutting expenses and raising funds, lack of funds available to diocesan priests and mission degradation in some parts of the country.

8. Holy water for the border-crossers. The migration issue continued to top the agenda of various religious groups. While fortune seekers in Matabeleland South were given holy water to cross the border with South Africa, some religious leaders opposed deportation of foreigners from Zimbabwe. Catholic bishops issued a patoral letter addressing Zimbabweans in the diaspora and invoked politicians to cross border to witness the situation. Regional Catholic Bishops’ group held a conference on human trafficking. 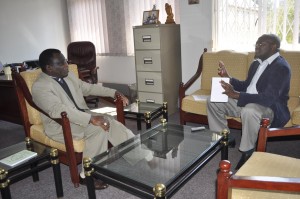 Catholic bishops like Catholic Archbishop Robert Ndlovu (left) were encouraging larger public discussion of human trafficking issues and addressed Zimbabwean diaspora in a pastoral letter.  In 2012, the transition from foreign-born missionaries to local clergy continued within the Catholic Church in Zimbabwe. (Photo: The Standard)

9.  Howard Hospital saga showed international donors are watching.  A team of eleven Canadian volunteers had to suddenly alter their plans to exit Zimbabwe, while back in their home country long-time donors still consider responsible action for Chiweshe community after the Salvation Army had dismissed a missionary doctor from the hospital he had been managing for years with great success.

In 2012, RelZim.org went truly global. Religion in Zimbabwe was a topic of interest to readers in 191 countries including Samoa, Kyrgyzstan, Bolivia, Latvia and Malaysia. 35% of our readers came from Zimbabwe, 15% from South Africa and 14% from the UK, followed by 11% from the US.

Special thanks for the New Year to each one of our readers as well as our writers, contributors and donors.