On Monday, Archbishop of Canterbury Rowan Williams arrived to meet President Robert Mugabe at the state house in Harare in a police convoy. According to the Anglican prelate, the over 90-minute meeting “was a very candid meeting; disagreement was expressed clearly but I think in a peaceable manner.”

“We have asked, in the clearest possible terms, that the president use his powers as head of state to put an end to all unacceptable and illegal behaviour,” Williams told journalists at Bronte Hotel following the meeting.

Archbishop Williams presented Mr. Mugabe with a dossier about the mistreatment of the Anglicans belonging to the Church of the Province of Central Africa, underwritten by the following Anglican prelates:

Abuses detailed in the dossier given to President Mugabe included: 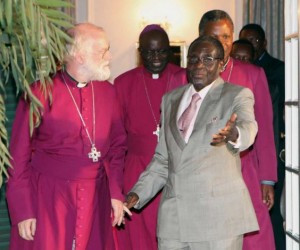 In response, the president delivered a history lesson on Anglo-Zimbabwean relations, detailed his own religious upbringing and reminded Williams that the Church of England is “a breakaway group” from the Catholic Church. Despite persistent rumours over the 87-year-old president’s health, Williams commented: “He’s on top of things intellectually.”

“I’ve been immensely moved by it,” Williams said about his visit to Zimbabwe. “I’m just deeply glad that I came because seeing these immense congregations in the most difficult situations, seeing what they achieve, it’s just fantastic. It’s one of those ‘I’ve seen the Church and it works’ moments.

“This morning we spent the whole morning in the Manicaland diocese visiting a number of congregations that have been excluded from their church buildings. They gathered at the roadside to meet us, they gathered in extremely smelly disused cinemas to meet us and in the middle of a field. They’re there, they’re growing numerically. In terms of numbers there’s no comparison between the Kunonga faction and the Church. It’s been hugely moving and I’m very glad I came.”

Archbishop added that he had no regrets about his visit to Zimbabwe and meeting with Mr. Mugabe “partly because the local Church itself needs a platform to make absolutely sure that its concerns – its grave concerns about injustice and violence are given the maximum possible publicity”.

Before meeting the president, in the morning yesterday, Archbishop Williams travelled to the town of Rusape, 90 miles southeast of Harare, where followers of Nolbert Kunonga have seized the local cathedral.

Later during the day, Williams made another trip in the direction of Mozambique. Newsday reported that in Mutare, he was barred from entering the Anglican Cathedral. So the meeting with about 5,000 worshippers, who came to welcome him to Manicaland, took place at Mutare Show Grounds.

Williams visited St Augustine’s Mission School, 20 kilometres north of Mutare, where Kunonga’s supporters had again converged to demonstrate against him. The boom gate at the mission school was locked and Williams and his entourage (Archbishop Albert Chama, Bishop Trevor Mwamba, Bishop Julius Makoni of Manicaland and Harare’s Bishop Gandiya) had to leave their cars outside the gate and proceeded into the school yard on foot. They were not allowed into the church at the mission. Williams only managed to have a few photos taken outside the church and had a few prayers at the Anglican nuns’ premises.

Today, Archbishop Williams flew from Harare to Zambia, where he will continue his Southern African tour, to later return to the UK on Thursday.